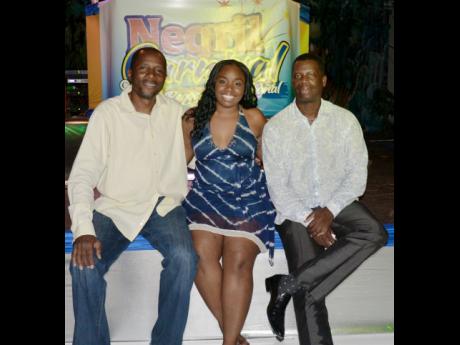 Director of Magic Wand Syndicate, Dimario McDowell (left) and his colleague Delano McFarlane, pose with General Manager of Jamaica Tamboo, Tashie Black during the launch of Negril Carnival at the Jungle Nightclub, recently. 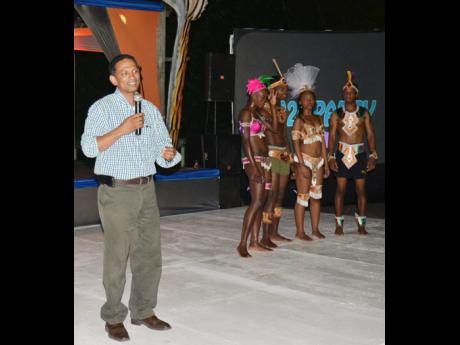 The Magic Wand Syndicate officially launched its upcoming week-long Negril Carnival at the Jungle Nightclub in the resort town recently.

The event will get under way on April 14 and comes to a climax on April 19. It will kickstart with the staging of Socarobics, a daily two-hour exercise/dance session, which will be held on Tuesday, April 14 and Wednesday April 15, between 6:30 p.m. and 8:30 p.m. On Thursday, April 16, there will be Ole Mas, at Wavz Beach, featuring Fab Five, Admiral Bailey, Lloyd Lovindeer, Oscar B, Lima Calibo and the Humming Bird Steel Band, among others.

The weekend will welcome Kolours Jouvert on Friday, April 17, which is classified as a water/dancehall party. This event will begin at 2 p.m., and end at 10 p.m., and will feature, among other things, a water slide, watering hole, wet T-shirt contest, a bar, two food stations and a water truck bounce-a-bout. Entertainers Ding Dong and the Ravers Clavers, Bling Dawg and Kreecha, QQ and Chi Ching Ching are among the entertainers who have been booked to perform at this event.

On Saturday, April 18, there will be two events - a catamaran champagne cruise and the H2O party, a hybrid water/dancehall/soca party from 2 to 10 p.m. The cruise will begin at 4 p.m. and will feature onboard entertainment in the form of Merritone's Monty Blake, Andrew Henry and soca artiste Lima Calbio. Patrons aboard the cruise will also have access to the H2O party.

The event will climax on Sunday, April 19, with a road parade featuring music trucks with Skinny Fabulous, Lima and Kurt Riley, as well as Junkanoo, stilt walkers and marching bands.

According to Magic Wand spokesman Michael Edwards, Negril was seen as the ideal area for festive events of this nature, based of the resort town's stellar track record in hosting live events, its geographical position, natural beauty and laid-back atmosphere.

"The idea behind the carnival is to take advantage of the existing unique, natural attractions of Negril being in the western end of the island; being still largely secluded, despite modernisation; and to bring all the elements that people would be familiar with and expect from an event like this - the fÍtes, the soca, the different mixes of music, and to sort of implant that into the region to sort of create a new hybrid," Edwards told The Gleaner.

Director of the Jungle Nightclub, Bryan Wallace, in voicing his company's sponsorship support for the event, said he was pleased to be on board, as the event would add to Negril's entertainment offerings.

"It is natural for the Jungle to be a part... we firmly believe that Negril Carnival will become, not just a fixture on Negril's calendar, but it is going to fundamentally transform Negril in a good way. And we are very pleased to be such an integral part of the start of this transformation of Negril, into once again becoming the party capital of Jamaica and the Caribbean," Wallace said.

Other major sponsors of the event include Jamaica Tamboo, Wavz Beach, Monymusk Rum and Express Fitness.