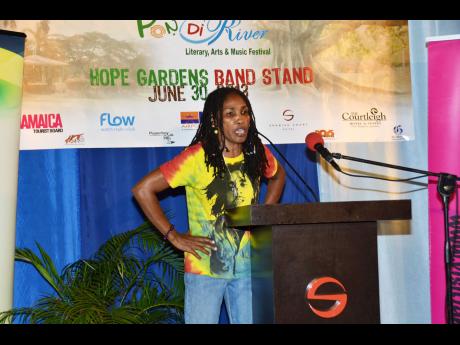 Cherry Natural unleashed powerful poems laden with strong messages of female empowerment, revolution and love on Tuesday when she performed as featured poet at the Poetry Society of Jamaica’s March Fellowship. Entitled Woman Rising, the fellowship was hosted to pay homage to women and poetry in a twofold celebration of International Women’s Day and World Poetry Day.

The open mic segment served as the night’s starter and saw varied presentations, a few of which provoked discussion in the analysis segment. The evening’s featured works also saw the reading of Lorna Goodison’s Where I Come From and Prof. Mervyn Morris’ Writing as tributes, honouring women and the craft of writing respectively.

Cherry Natural started her reading with Pickney Poems, detailing the birth and development of her poems, and then addressed the creative space and contributions of poets in Is Long Time Poets A Write. From there on she ventured extensively into the terrain of women’s empowerment, beginning with Woman I Was Born, which speaks about women not having to fit within established norms to be considered woman.

“I don’t have to be weak and fragile,” she said, acknowledging singer Pam Hall, who was in attendance. The backing track for Woman I was Born, which Hall produced and is on Cherry Natural's Earth Woman album, is from a Pam Hall song.

In the same vein Natural read Woman of My Word and Man Show, the latter detailing what she said was the struggle she faced as a woman coming up in the industry, especially in doing performances.

In one of many poems that hit home she read Slanguage, taking jabs at pop culture and its attendant language, noting that people were “swaggin right back pan di slave ship.” The usually fiery poet shifted things around with Compatible, outlining the qualities she might like in a partner, and also addressed love with Warrior’s Love Poem, both of which elicited much applause.

Cherry Natural closed with Fight Back, a piece that had a strong impact on the predominantly female gathering. Natural shared some of her martial arts expertise in advising women to take a stand against abuse, saying, “first time victim, second time volunteer.” She used a pair of nunchucks to do an elaborate demonstration, much to the surprise and excitement of the audience. “We take the revolution serious,” Cherry Natural said.

Following up on her 2012 album Intellectual Bad Gal, the public can expect a new writing project of the same name from Cherry Natural. It is a book of poems, quotations and self-defence tips.