Wilfred ‘Jackie’ Edwards, an unsung hero of the 60s 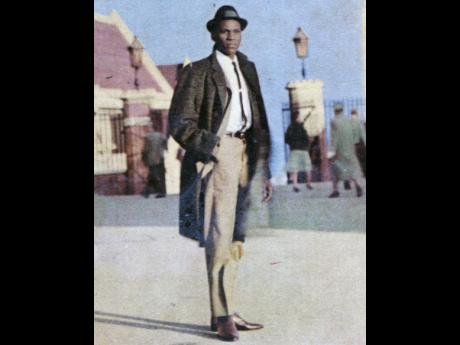 Wilfred ‘Jackie’ Edwards was one of the early Jamaican recording artistes who utilised Latin rhythms to great effect in their recordings. Some say Edwards was Jamaica’s first superstar, having placed four number one singles on the Jamaican hit parade in less than a year, between 1960 and 1961, while pushing a fifth into the top 10. The fact that they were his first set of recordings, he created the most phenomenal music industry statistics in the history of Jamaican popular music.

Stories of Edwards are seldom written in books, as most authors erroneously seem to think that Jamaican popular music began with the ska, and since Edwards wasn’t much a part of that, having migrated to England by 1962, he is hardly remembered and consequently numbered among the unsung heroes. But Edward’s role, as we will see later, may perhaps be just as important as those played by Dennis Brown, Gregory Isaacs, Alton Ellis, John Holt, Millie Small, Laurel Aitken and others.

Considered Jamaica’s most accomplished balladeer, Edwards was also an extraordinary songwriter, penning all his early hits, while later, his writing skills helped Chris Blackwell to set up his Island Record Label in the United Kingdom, at a time when ska was known there as Blue Beat, named after the famous U.K., licensing label. Even before Millie Small had the world rocking with My Boy Lollipop, Edwards was writing songs for artistes that Blackwell produced, while having hits in the U.K., for himself as well.

Edwards' earliest set of recordings - all hits, were mainly slow and mid-tempo, danceable sentimental ballads which, for the most part, leaned heavily on Latin rhythms, created by the incomparable Caribs band - an Australian dominated ensemble, which was invited to Jamaica by Hotelier, Abe Issa. The 20-year-old, Edwards, wrote the first of the lot - a slow piece, titled, Your Eyes are Dreaming, in 1959 for the budding record producer Chris Blackwell, who first set up his Island Record Company in Jamaica before moving it to the U.K. Edwards immediately stamped his lyrical prowess with:
‘Your eyes are dreaming, they’re always dreaming of me - Ooohh Ooohh
Darling I love you, won’t you say you love me too.
Your eyes are like the stars dear, your kiss let me know - Ooohh
I dream you kiss me goodnight dear, the stars bear witness for me - Ooohh’.
The recording, accompanied by the incomparable Caribs, became an instant hit and a number one song on the Jamaican charts in 1960. Interestingly, the recording was the B side of, We’re Gonna Love, a bluesy piece that also sat comfortably in the top 10 charts. By creating this double ‘shock-attack’, Edwards became the first recording artiste in Jamaican popular music, behind Laurel Aitken, to put two hit songs on one vinyl 45 RPM record, thus making him an instant star in Jamaica almost overnight. With accompanying choruses and the Caribs at full blast, Edwards became almost unstoppable with his follow-up hit, Tell Me Darling - perhaps his best known song, which could be found in almost every Jukebox on the island. In every nook and cranny, you could hear people singing:
‘Tell me darling, tell me you love me so.
Squeeze me darling, hold me never let me go.
I love you darling, do you know I do?
I think of you, yeah yeah, wherever you go’.
It was one of the first records to make an impact on the burgeoning Jamaican Recording Industry. Tears Like Rain, using the same formula with the Caribs in full command, saw Edwards crooning;
‘You broke his heart once more, now he’s away.
Now you find you love him more and more each day.
That night he left, he said he’d never come back again.
Then your tears come falling down like rain’.

Equally popular during that period  were his other compositions which included, Heaven Just Knows, I love you no More, Whenever There’s Moonlight, and the Rock and Roll piece - One More Week.

Born in 1938, Edwards grew up in Kingston with 14 siblings. As a youngster, he got very hung up on the work of Nat King Cole who became his earliest inspiration. That inspiration was so great, that some began referring to Edwards as Jamaica’s first ‘Cool ruler’. By age 14, he began seriously to put his talent on show by performing at stage shows in Kingston, before actually getting into the recording studios. He however, didn’t spend much time on the Jamaican music scene, and as such, didn’t have much of an impact on the emergence of ska music. Edwards was indeed in the right place at the right time when a young Chris Blackwell was seeking talent to help set up his Island Record Company and Label in the United Kingdom. Blackwell took Edwards to England in 1962 and the youngster virtually made it his home. He became the mainstay of Island Records during their early years, working as singer and songwriter for the label, while releasing several singles for himself between 1962 and 1968, some in duet with Millie Small, Island’s other big expatriate singer. Becoming ‘Head cook and bottle washer’, Edwards’ duties also included delivery of Jamaican records by bus to the capital’s suburban shops. His greatest success however, came in 1966, when two of his compositions, - Keep on Running and Somebody Help Me, by The Spencer Davis group, climbed to the top of the U.K., pop charts.

Edwards’ popularity in Britain soared to even greater heights in 1963, with the U.K., release of his album, ‘The Most of Wilfred Jackie Edwards’, which contained all his early hits. It exposed another style of Jamaican music to an international audience, while coming as a breath of fresh air to the West Indian expatriate community. He moved to Trojan Records in 1970 and later in the decade, did a slew of recording for producer Bunny Lee. He also produced the 1977 album, ‘Move Up Starsky’, while continuing to work as a recording artiste, doing regular album releases into the mid-80s. Edwards died in August 1992 from a heart attack.