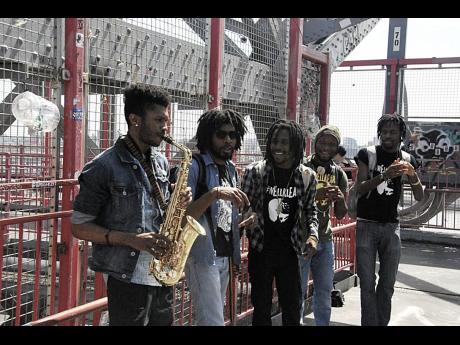 In recent times, many critics have suggested that reggae is making a resurgence among major genres like hip hop on the international charts, and OMI's recent No.1 Billboard hit is evidence that there is still some amount of steam left in Jamaican music. Now, up-and-coming reggae band, Heights of Wisdom, believes they are next in line to add their touch to reggae's rich legacy.

Fresh from a stint of shows in the US Tri-State area, Heights of Wisdom believes that reggae is growing and will see continued growth on the international stage.

The US-based outfit, is currently in Jamaica executing a meticulous promotional campaign and tells The Gleaner, that despite their progress in the American market, without winning approval in the local market, ascending in the music industry is almost pointless.

"Our music is receiving positive reaction from fans in various parts of the world and that is evidence of the genre's increasing impact. But you know what they say, you have to dance a yard before you dance abroad, so we are here promoting and learning the insides of the music industry. Some of our parents were artistes and they made some mistakes that we are not going to make with our business decisions," the band's lead vocalist, Kemani 'Fari difuture' Powell, told The Gleaner.

Heights of Wisdom recently released their first album called Generation Y, and expressed that the message on the project is intended to socialise the new generation of potential leaders.

"Generation Y is about us...the youths from the late '80s to this day. It is our time to make the right decisions and send the right messages to people, we have several legends in our music that set it for us. However, the onus is on us now to take charge and pave the way for the next generation, and the only way to accomplish that is with positive vibrations," Jermaine 'Autarchii' Joseph, another vocalist in the band, expressed.

According to Heights of Wisdom, reggae is not dead, however, the genre needs to be treated with respect and handled like a real business. They believe Jamaica still produces some of the best artistes and performers in the world, but also pointed out that the right attitude and management will determine whether or not success will be achieved.

In commenting on the industry's practice of oversaturating the market with music, the band members are of the belief that the key to creating a "lasting impact" is to make music that will stand the test of time.

"The thing is, we have this mindset that if we release a lot of material, we are going to run the place, but this is not always so. What Heights of Wisdom will do is make real music that will be around for many years. If you listen to our content you will see that what we speak about are real-life issues. Even if we do a song about love, there is something that people can learn from it," the band agreed.

Following their promotional stint in Jamaica, the band plans to return to the US, where it will continue its musical journey as well as release new music videos for some of the tracks on the album.