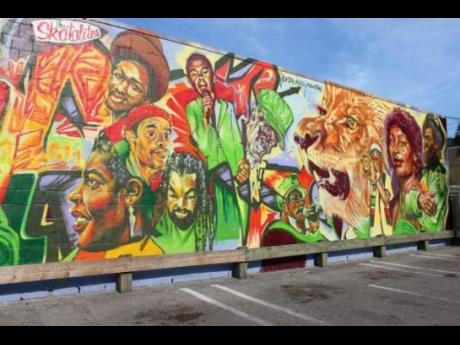 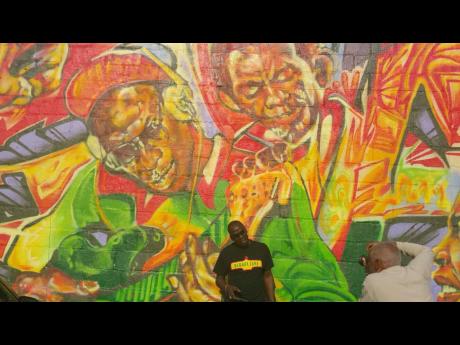 Contributed
Leroy Sibbles pose in front of the huge reggae mural erected in the Eglinton West neighbourhood in Canada. 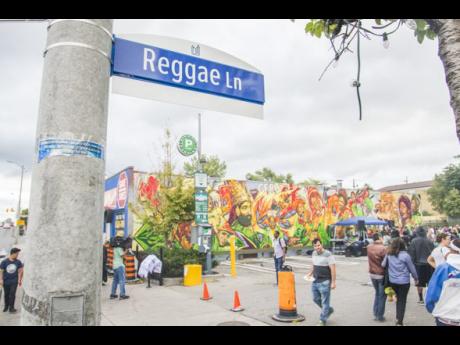 Contributed
The roadway off Eglinton Avenue and Oakwoods Avenue that was renamed as 'Reggae Lane'.
1
2
3

Another foreign country has once again shown its respect for reggae music. On Saturday, the Eglinton West neighbourhood in Canada got a new 1,200 square foot mural, which not only pays homage to the genre, but serves as a reminder of the country's rich history with reggae music and its culture.

In a joint effort with the public arts organisation, The STEPS Initiative and The Laneway Project, Toronto-based artist Adrian Hayles and a group of young painters created the mural. According to numerous online sources, the mural is the latest effort by the area's councillor, Josh Colle, to highlight the country as a reggae hotspot. Last year, Colle helped rename a roadway off Eglinton Avenue and Oakwoods Avenue in the area as Reggae Lane. Along with the mural, Heritage Toronto also unveiled a historic plaque to commemorate the occasion.

Bob Marley, Haile Selassie and the Lion of Judah are all featured on the mural along with a host of local reggae talent, including The Skatalites. The painting is part of a project led by Colle that seeks to bring the music back to the lane. "Toronto, for sure, was the spot," said Colle on Saturday. According to him, the neighbourhood was a gathering place where famous reggae names like Leroy Sibbles, Stranger Cole and Pluggy Satchmo made their music. "With the concentration of artists living, working, recording in the Eglinton West area, plus the record stores that were there, and studios, it was the stretch," he said. "I feel like we've just scratched the surface. It's a really rich history." His views were shared by co-director of the Laneway Project, Michelle Senayah, who said, despite the developments so far, there's still a lot more work to be done. Vera Belazelkoska, a project manager with STEPS, showed strong support for the initiative and expressed that, by sponsoring local artist Adrian Hayles to paint the mural, STEPS hopes to create a new cultural landmark for the community. "Not many people know that Little Jamaica or the Eglinton, Oakwood neighbourhood is actually the second-largest hub for reggae music after Kingston, Jamaica," she claimed.

The area's ongoing revitalisation project is funded by the Ontario Trillium Foundation.