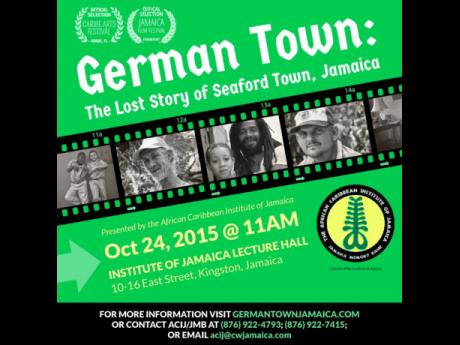 The African Caribbean Institute of Jamaica/Jamaica Memory Bank, a division of the Institute of Jamaica (IOJ), an agency of the Ministry of Youth and Culture, will present the screening of the film German Town - The Lost Story of Seaford Town, Jamaica, on October 24.

The documentary will be aired 10 a.m.-1 p.m., at the IOJ Lecture Hall, 10-16 East Street, downtown Kingston (entrance on Tower Street).

The film captures the little-known history of German heritage in Seaford Town (also known as German Town), Westmoreland. Here, a declining group of German-Jamaicans dwell in a village in isolated, undeveloped mountains.

Their history is unique to Jamaica and it is said that the inhabitants of this village are descendants of the German indentured servants, who worked on the sugar plantations after the emancipation period as a substitute for enslaved labour.

It is believed that the inhabitants of Seaford Town are descendants of Germans, who migrated to Jamaica as runaway prisoners; former soldiers battered after the Napoleonic wars; or just a people seeking a better life to escape poverty and hardship in their European homeland.

The documentary was designed to explore both the contemporary life of this small group of Jamaicans of German ancestry and their obscure history. The 55-minute documentary is produced and directed by David Ritter and co-produced by Clinton Wallace for Photomundo International, with music by Project Sound.

The film-screening will be followed by a question-and-answer session by Ritter. Admission is free, and all are invited to attend.