'The Baby Scam' is contagiously funny 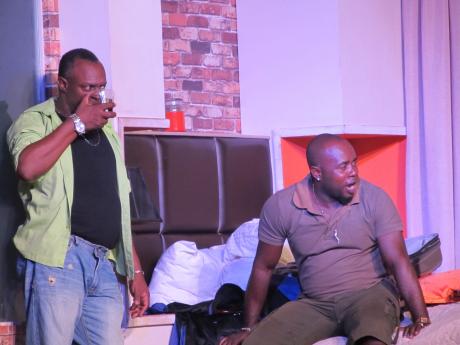 Patrick Brown has ventured into the scamming business - in his latest play, that is - with creative and hilarious success. From the power keg of humorous lines, some fine directing, excellent timing of cues well executed by the production company's (Jam Biz) resident cast, to the lavishly designed set and props to boot, all combined to showcase another slice from Jamaica's dark culture. They call it The Baby Scam.

The Baby Scam tells a 48-hour story set in a penthouse suite at a luxurious hotel. The occupant of the room is Rocky (Courtney Wilson), a salesman for a pharmaceutical company. On an annual company retreat, he is assigned the room as part of his prize for being the top salesman for the year. recently married, all seemed to be going well for him. That is until two sisters, Trixie (Sakina Deer) and Lilah (Camille Davis), arrive and rain on his parade.

The arrival of his adoring wife, Bree (Sharee Elise), does nothing to abate the problem. Nor does the presence of his friend and co-worker Scrappy (Glen Campbell) seem to help, and at the end of the play, leaves even the audience slightly baffled.

Wearing the hat of designer, Brown, however, did no wrong in conceptualising the appropriate costumes and a masterpiece of a set that engulfed the entire stage of the Centrestage Theatre.

The set realism style was on par with that of a movie. From the well-decorated walls, the sprawling king-size bed placed stage left, close to the balcony door, and a bathroom defined by its light, complemented by a bar loaded with what appeared to be expensive wines, the set had the look and feel of a hotel penthouse suite.

Meanwhile, the actors used the set with a sense of familiarity while demonstrating acting of a high standard, despite having to deliver the same lines several times a week. And so, Campbell, Wilson, Elise, Davis and Deer must be commended for the convincing manner in which they executed their roles on Sunday, their 100th performance.

Campbell, Davis and Elise were at their commanding best, delivering each punch line with precision. Elise, as the wife, spent the least time on stage, but managed to garner enough traction to her character. Davis played the older sister Lilah.

There was not much growth in her character, who remained the money-grubbing person to the end, but Davis managed to make her a bit likeable at the end of the play.

LIVED UP TO NAME

Campbell was just as effective in creating a character that lived up to its name - Scrappy, the despicable scrap of a human being. Once again, he was able to have the audience laughing at each of his well-timed lines.

For Deer and Wilson, it was mixed feelings. It was a pleasure seeing Wilson playing an upper-class character, and he did a fine job staying true to his character's status in speech, gestures and mannerism. Deer began well with Trixie - the seductive house maid clad in French apparel. But as the play progressed, the actress returned to her self-pitying key, in vocal and facial expressions. It is something that Brown and his co-director Trevor Nairne may want to address before their next production. - to help her acquire a modulated voice; otherwise, she will forever be typecast.

The directing was also of a fair standard. For the most part, the blocking was reasonable. Well-defined exits and entrances were made smoothly by the actors. Levels were used to reinforce the figures of authority in the respective beats and all the acting areas were covered.

There is no denying that The Baby Scam is a delightful comedy, but it is not for children due to its largely adult content.