Hopeton Lindo impresses on 'My World, Your World' 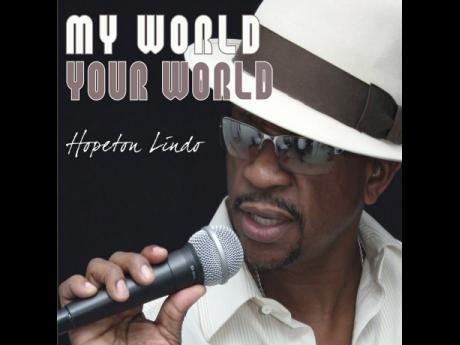 Seasoned reggae singer and songwriter Hopeton Lindo, is enjoying success with his latest album - My World Your World - that was inspired by the state of the world today. The 16-track album, Lindo's fourth, features the production talents of the iconic Sly and Robbie, Bobby Digital, Syl Gordon, Gilmore Walters,and John FX, as well as a number of reggae's greatest voices.

'My World, Your World', has held the top spot on the South Florida Top 15 Album Charts for the past three weeks and two singles from it, Love You All Over and Imagine, are number 15 and 19 on the Singles Chart. The album also holds number four on the New York Reggae Charts.

"The album was released on September 11 and we have had some good responses from all over," Lindo said. "The album has some lover's rock, some songs that deal with crucial world issues like the title track, My World Your World, and Children Under Attack, and we did John Lennon's Imagine. Empress, was done in celebration of women. It's a balanced album."

'My World, Your World', Lindo revealed, features the vocals of reggae music legend Dennis Brown, who had initially started to record it with Gordon at Cell Block Records before his transition. As the writer of the song, Lindo said he decided to complete the recording as a tribute to the reggae legend.

"Syl and I got together and decided that we were going to finish up this song. Me being the writer I added some lyrics and Luciano came in and we completed the song," he said. "The ballad mix was actually released some time ago but what we did was a remix with Sly and Robbie and gave it a different feel. That is why you have two versions of it. The first one is the remix with Sly and Robbie that has never been released before and the album closes with the ballad mix that sends the message that the album is trying to project."

Other guest vocals on the album include Anthony B - Turf, Mykal Rose - Roadblock People, Fiona - In The Mood, and Freddie McGregor and Rory (Stone Love) - Bite De Dust. Lindo also pays tribute to another legend, Gregory Isaacs on the track, Red Rose for Gregory.

There is also a cover of John Lennon's Imagine, which Lindo lists as one of his favourites, as well as beautifully produced love songs that include a cover of Al Green's Let's Stay Together; Love You All Over Again, Hey Girlfriend, Heavenly, If You Only Knew and Lost Without Your Love.

Lindo broke into the music industry in the late 1980s when he produced and recorded the classic, Territory in 1987. He also recorded his Black History for producer Mikey Campbell and has also recorded for Music Works, King Tubbys, King Jammys, Two Friends, Cell Block, Heavy Beat, Irie Pen label and others.

Lindo, also known as The Pen, for his well respected skills as a writer with credits that include hits like Telephone Love by J.C Lodge; Mr.Loverman by Shabba Ranks; Red Rose for Gregory by Gregory Isaacs, Confidential by Aswad; First Impression by Dennis Brown, Can You by Brian and Tony Gold, Temptress by Maxi Priest, and Wanna be Loved by Buju Banton.

He was also a member of the Black Star International sound system that had as its crew Brigadier Jerry, Tiger, as well as Anthony Malvo.

In recent times Lindo has been mainly working behind the scenes, writing songs for several artistes and doing a number of charitable projects including We Will Always Be There, which was written to raise funds in the wake of the disastrous earthquake that struck Haiti in 2010. The song was produced by Willy Lindo.