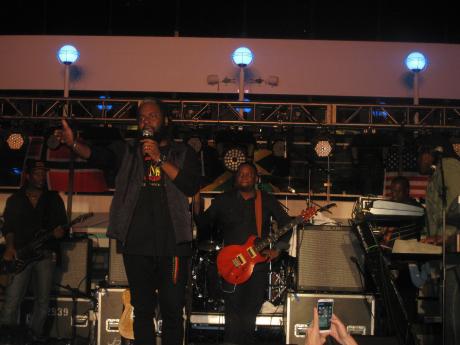 Mel Cooke
Peetah Morgan at the microphone as Morgan Heritage performs during Morgan Heritage's set on Monday's opening night of concerts during the 2015 Welcome to Jamrock Reggae Cruise. 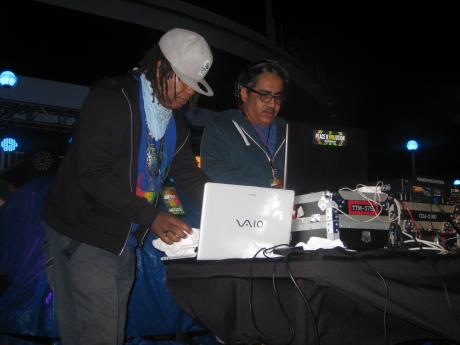 Mel Cooke
Geefus (left) and Rory at the controls as Stone Love Movements closes off the opening night of main stage performances on the 2015 Welcome to Jamrock Reggae Cruise. 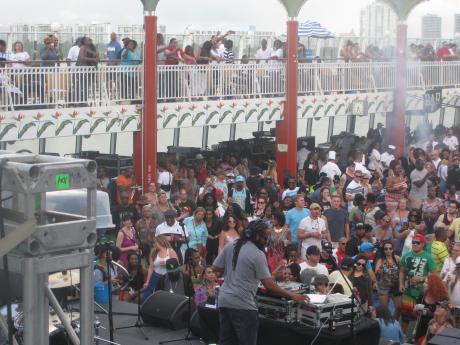 File
Razarella entertains the crowd as the 2015 Welcome to Jamrock Reggae Cruise sails away from Miami on Monday afternoon, heading towards Montego Bay.
1
2
3

Gramps Morgan was at the keyboard while his son Jemere embraced Morgan Heritage lead singer 'Uncle Peetah' on stage. And live concert closer, Stephen Marley, also presented generation next in his son Jo Mersa to an enthusiastic audience on the open-air main stage on the 12th deck of the Norwegian Pearl on Monday night.

It was not only a night of reggae generations, but also guests, as, most of the standout performers introduced a musical pal or two on the opening concert night of the 2015 Welcome to Jamrock Reggae Cruise.

When the persons who would have been the guest was not there, as in the case of very strong concert series first performer Protoje, he ensured that the audience knew about Chronixx's input as he did Who Knows.

There was accompaniment in the flesh for Protoje as well, Ky-mani Marley joining him for their ode to the lady who was In Love with the Rastaman.

A measure of the audience's commitment was not only that they stuck around through a few extended band changes, but also maintained a very high level of general enthusiasm on a line-up where Protoje and Morgan Heritage were followed by Maxi Priest and, after Stephen Marley had ended with One Love, Stone Love Movements with Geefus and Rory at the controls took over and rocked a numerically reduced but very responsive audience.

Maxi Priest and Stephen Marley had their guests, the former doing an extended run with deejay Beniton (aka Jack Frost) which whipped the audience into a frenzy (the bassline of Housecall, originally done with Shabba Ranks) was sufficient to induce screams. Stephen Marley had a couple members of Jah Army with him on his musical recruitment drive, Spragga Benz (who injected Rasta Run The World into the mix) and Damian 'Jr Gong' Marley.

system in The Atrium on level 7, concurrently with Stone Love in the main performance area, five levels above.

Stone Love started with the rockers of the rhythm to, The Promised Land, and included Dawn Penn's No No No, Ini Kamoze's Worl' a Reggae Music, Jr Gong's dub plate Stone Love a de Standard (a take-off of Welcome to Jamrock) among the specials in the mix. So was the Wayne Wonder and Buju Banton dub, Forever Young, as well as Capleton's Tour on the Corduroy riddim, the Showtime juggling included, as they upped the tempo and kept the cruisers very happy under the dark sky way into the morning.

References to the cruise were natural, Protoje prefacing Who Knows, with a remark that the Norwegian Pearl was not yet in Caribbean waters. He paid

homage to DJ Liquid, saying that when many would not give him a chance as a young artiste, Liquid put his career on the road. Morgan Heritage included a healthy serving of tracks from their Strictly Roots album, including the title track, in a set where their well known, Don't Haffi Dread and She's Still Loving Me, were among the selections which had the cruisers screaming.

Maxi Priest gathered momentum with Wild World, after the audience took some time to warm up when he started with Should I, the R&B of Set The Night to Music, impressing. And while the cruise is between the USA and Jamaica, Stephen Marley donned the guitar to sing of Africa in the later section of a strong, extended showing.

On concert night two of the Welcome to Jamrock Reggae Cruise 2015, the line-up was Christopher Ellis, Tanya Stephens, Tarrus Riley and

Ky-mani Marley, followed by Saxon sound system on the main stage, with Stone Love Movements in The Atrium.

The Norwegian Pearl will make stops in Montego Bay, St James, and then in Ocho Rios, St Ann. Among the upcoming performers are Elephant Man, Bounty Killer, Busy Signal and Super Cat.