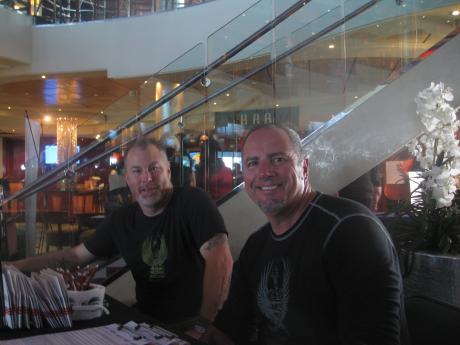 On the second night of the 2015 Welcome to Jamrock Reggae Cruise's first leg, which started on Monday, November 30, in Miami, USA, a duo came on the main stage. They were introduced to the audience as Chris and Rob, and the former was handed the microphone. After he finished, there were cheers, but Chris Brewer had not sung, deejayed or played an instrument. He had spoken about cancer, inviting persons on the cruise to a sign-up desk to submit inner-cheek samples for DNA analysis, with the possibility of becoming stem cell donors for those needing a marrow transplant.

Bob Marley - father of brothers Stephen, Ky-Mani, Damian and Julian, who were slated for the cruise - died of cancer in May 1981.

When The Sunday Gleaner met Brewer and Rob Rushing at their desk in the other main party area of the cruise, the Atrium, the speakers on the nearby stage were silent, but the indoor setting hummed with the conversation of persons engaged in the serious business of a party cruise. On the Norwegian Pearl's final full day at sea for the cruise's first leg, Brewer assured The Sunday Gleaner that sign-up had been brisk.

This time around, recruitment was specific to persons living in the US legally, as getting to them for donation if a match was made were within the Love Hope Strength Foundation's physical and budgetary reach. Persons from the UK are referred to the organisation's representatives there.

And, with many persons answering the call to 'Get on the List' to become a marrow donor, Brewer indicated a long-term engagement with the Welcome to Jamrock Reggae Cruise.

If a match is found and a stem-cell donation made, it will be announced on subsequent cruises.

Brewer, president and CEO of Love Hope Strength, told The Sunday Gleaner that while the foundation operates worldwide, it is its first reggae recruitment.

Brewer, a survivor of testicular cancer, is a US Air Force veteran, where he was a crew member.

"I was diagnosed a couple weeks after Lance Armstrong and we became friends," he said.

"We tend to get engaged with a lot of rock and roll," he said, naming American punk rock band Flogging Molly as an outfit with which the foundation has had a lot of success.

The connection with the cruise came through Damian Marley's manager, and Brewer said it was important to diversify. This widens the donor pool and increases the chances of finding a match.

The foundation specifically targets leukemia and lymphopenia (lymphocytopenia). It was founded by Mike Peters and James Chippendale in 2007.

For stem-cell donations, the best age group is the 18- to 30-year-olds, although donors are accepted up to 55 years old. A lot of persons in the ideal age range attend music events. They are also gung-ho about music events that Love Hope Strength hosts well off the beaten concert circuit, taking groups of persons high up Mount Kilimanjaro and at base camp on Mount Everest.

"We played music at the top of Kilimanjaro. With the money we raised, we built a children's cancer clinic in Tanzania. We still have the record for the highest acoustic concert ever," Brewer said.

The foundation is based in the mountains, but lower, in Denver, Colorado. From there, Love Hope Strength organises volunteers for donor recruitment in cities where concerts are held to support its staff members. "We do about 1,000 concerts a year," Brewer said.

Describing bone-marrow donation, Brewer said persons with the types of cancer that Love Hope Strength deals with, are in a situation where "your immune system is trying to kill you".

To counter that, the immune system has to be wiped out and the stem cells from a donor create a new immune system in the recipient, through a

bone-marrow transplant. Screening is crucial, as the recipient would also get any illnesses that the donor has.

Brewer ties in the signing up to the notion of One Love, captured in the Bob Marley and the Wailers song One Love/People Get Ready, which the British Broadcasting Corporation (BBC) named the song of the millennium in 1999.

"How could you love someone more than save the life of someone you might never meet?" Brewer asked rhetorically.

It is, hopefully, the beginning of a deeper engagement with reggae, as Brewer said there will be a meeting with Jr Gong's manager to explore "other opportunities, what we can do".