Scorching performances at Groovin In The Park 2016 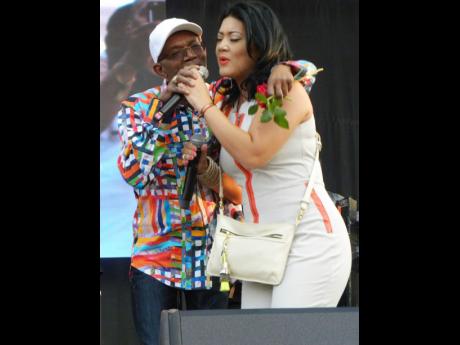 Contributed
Beres Hammond (left) invites Tessanne Chin to join him on stage to perform her version of Step Aside. 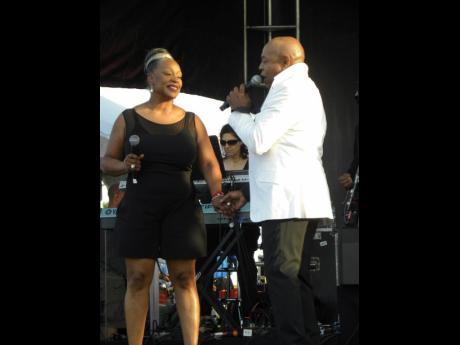 Contributed
Regina Belle and Peabo Bryson perform 'A Whole New World' together at Groovin In The Park 2016. 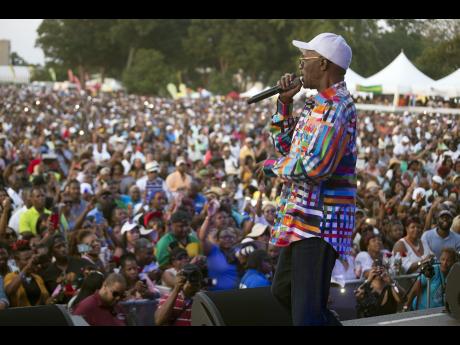 Contributed
Beres had the crowd 'Groovin' to his music. 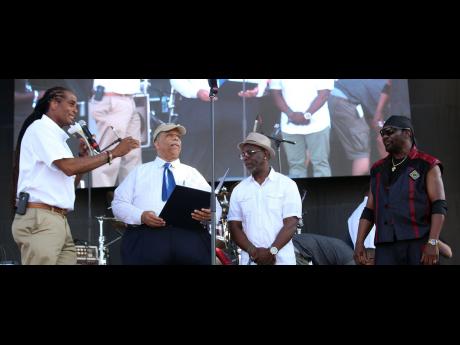 He has been putting up resistance for many years, but there was no resistance from audience members when Beres Hammond took to the stage at the Groovin' In The Park concert in New York on the weekend.

With a record number of patrons in attendance, Hammond took patrons on a stroll down memory lane with hits such as Feel Good, Can't Stop A Man and No Goodbye.

The sea of umbrellas which had shielded many from the scorching sun instantly disappeared, as patrons grooved to his melodious voice. Hammond played host to his audience as he went through the uptempo One Dance and She Loves Me Now.

Spotting fellow artiste Tessanne Chin in the audience, who had performed earlier in the show, Hammond had her join him onstage for a duet of Step Aside.

The crowd, though lukewarm during Chin's earlier performance, was now at a fever pitch when she joined Beres onstage.

Hammond also paid tribute to some of reggae's late great singers, including John Holt, Dennis Brown, Gregory Isaacs and Bob Marley, before belting out Rock Away, much to the delight of the crowd.

Proving once again that he is the consummate performer, Beres' hourlong set was the highlight of the night, as he occasionally joked and conversed his way into the hearts of music lovers all over again.

But before Beres took to the stage, it was Regina Belle and Peabo Bryson who upped the ante and energy in the park. Opening the set, Belle, who is celebrating over 30 years in the music industry, belted out several of her biggest hits, including Make It Like It Was, before making way for Bryson.

Bryson opened his 45-minute set by displaying his unique brand of vocals that has garnered him Grammy Awards and other accolades throughout his successful 35-year career.

He displayed the gospel-like grit that helped him become a household name and romantic crooner with hit songs like If Ever You're In My Arms Again, Tonight I Celebrate My Love and Can You Stop The Rain.

Midway through his set, Peabo announced that he would revisit the R&B side of his career. He then segued into a cover of Sade's King Of Sorrow.

Another crowd-pleaser occurred when Bryson was joined onstage by Belle as they delivered a rousing performance of A Whole New World.

Bryson closed out his set by handing out roses to the females in the audience, much to their delight.

Another rousing performance came from the man who coined the term 'reggae', Toots Hibbert.

With more than 60 years to their name, Toots and The Maytals' music has transcended time and generations. Opening the evening with one of their greatest hits, Pressure Drop, within seconds the crowd started dancing and singing along word for word.

Following up with hits such as Sweet and Dandy, Take Me Home Country Road and Peace Perfect Peace, Toots' set had many reminiscing on the good ol' days. Many patrons could be seen 'dropping a leg' and doing the ska, as they danced the day away.

The energetic performer showed no signs of age, as he jumped and danced throughout his set, his voice sounding as strong and distinctive as always.

Patrons could hardly contain themselves as Toots' band began the instrumental for Bam Bam. The dancing was once again on display as patrons were transported back in time.

Toots, along with Tessanne Chin, also received the United States House of Proclamation at the end of their sets.

The line-up also saw dazzling performances from Duane Stephenson and Tessanne Chin, as well as a surprise performance from Johnny P and Tiger, both of whom injected a bit of dancehall flavour into the night.

The almost 45-minute band change for Brian McKnight could not deter the thousands of patrons in the Roy Wilkins Park, and they were not disappointed.

Though it had been over nine hours of non-stop entertainment, there was no sign of fatigue, as patrons sang and danced along to hits such as Find Myself In You, You Should Be Mine and Love Of My Life.

With the show running a bit late, McKnight then segued into his more popular hits, including Back At One and Anytime, as patrons began exiting the venue, still singing along.