NDTC to remount Easter concert in May 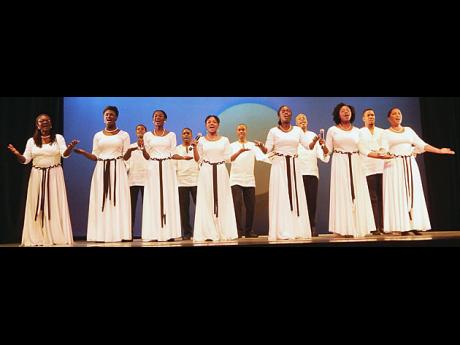 Michael Reckord
The NDTC Singers in a moment of praise. 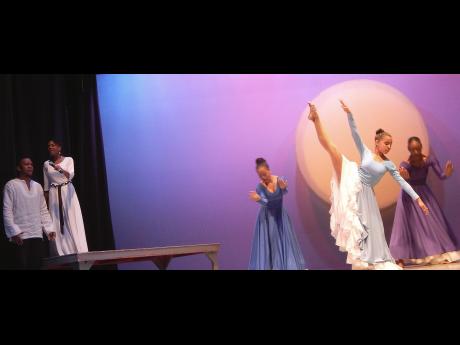 The concert mounted by the National Dance Theatre Company (NDTC) at The Little Theatre on Easter morning, "in celebration of the NDTC's 55th anniversary", will be remounted at the St Andrew's Scots Kirk in May.

The concert showcased some fine young dancers who will no doubt continue to keep the company's flag (and bodies) flying high. For one, there's Michael Small, who was a superb soloist in the revival of Clive Thompson's 2003 work Of Sympathy and Love, his interpretation of the Bible story of the resurrection of Lazarus.

There's Javal Lewis, who also had a solo (in Chris Walker's 2016 work, Walk With Me). And there's Gillian Steele, Rachel Walter and Ashley Bromfield, who were beautiful in Kerry-Ann Henry's Haven.

Small, who convincingly portrayed Lazarus rising from the dead and testing his body muscle by muscle, limb by limb, danced in the second of the two cleverly combined solos that made up Of Sympathy and Love. The much more experienced Mark Phinn portrayed Jesus in the first solo, but to the audience, the dancers were equally good.

Wearing colourful, flowing dresses, Steele, Walter and Bromfield showed in their dancing that the body can be as expressive as the voice, for they came across as sincere as NDTC singers Kaydene Gordon and Conrod Hall who accompanied them with The Prayer, a song that is as poignant as it is popular.

Haven was one of the two new works premiered at the Easter morning show. The other was Kevin Moore's Mercy, which was danced to Jeff Majors' composition for Psalm 23.

As has been happening for the 55 years since Rex Nettleford (together with Eddy Thomas) founded the company, there were works by Nettleford. The excerpt from his 1997 masterpiece Tintinabulum, his Revival Time and his choreography to Noel Dexter's music for Psalm 150, which closed the concert, were as exciting as ever.