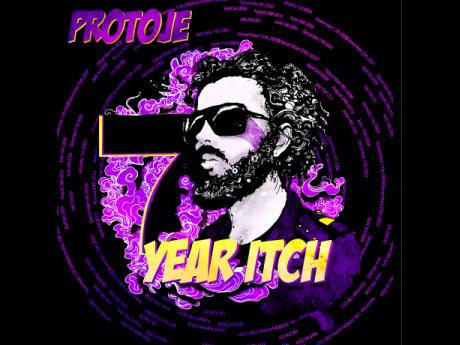 Though it seems that Taj Francis's career graduated to astronomical levels in little or no time, the visual artist declares that his path to success was carefully crafted.

Francis explained to The Sunday Gleaner, that his success as a visual artist was deliberate, if only in his practice to hone his craft and to refine and evolve his multimedia artistry. Now, the visual artist sells original artwork and has been commissioned for work with musicians and Hollywood films.

In the early stages of his career, working with musicians or for entities that might use his work for mass distribution was not part of Francis's ultimate career plan. He only aspired to put his work "out there". These days, Francis's compositions find themselves in the hands of reggae fans across the world by purchasing an album or EP.

"My first official album artwork was for Protoje, 7 Year Itch," he told The Sunday Gleaner. Released in 2010, the album art is a surrealist profile portrait of Protoje. Since then, Francis has undertaken other album and EP cover art projects for Protoje and emerging reggae songstress, Sevana. Other reggae revivalists Kelissa and Jah-9 have mimicked the caricature/portraiture style of cover artwork.

The first time Francis did cover art for recording artistes, his clients were not from Jamaica. The artiste revealed that his first EP artwork was for a spoken word collective from Brooklyn, New York. "It was so long ago, so the name escapes me. But that was actually the first," Francis said. But in both cases, where his skill was requested to create the visual representation of a recording artiste's work, the clients found the Francis' work online.

Daring to be different

"In Jamaica at the time, I found most of the content coming out boring, same old, same old," Francis told The Sunday Gleaner.

"For Protoje, I think it was through a mutual friend. Hearing Protoje's music was kind of a breath of fresh air. Around that time, a lot of new good music started to emerge slowly," he said. Francis told The Sunday Gleaner that there are times that he is inspired by a song or by multiple songs all at once. "But it's only a small part of my inspiration," he said.

This year, Francis' work was put in the spotlight following the release of the blockbuster Hollywood movie Get Out. The movie was named the highest-grossing movie ever, for a writer/director of an original screenplay. It was written and directed by Jordan Peele, previously known for his role in the hit sketch-comedy show Key & Peele aired on Comedy Central.

feature films. I spoke to the director, Jordan Peele, and his team briefly, so I could get a kind of rundown of the film.

At the time, they couldn't show the film outside of LA, so they gave me a semi-spoiler-free synopsis," he said. Francis was one of few artists hired to produce their version of a movie poster for the film. The poster was displayed on the film's website during its promotional campaign.