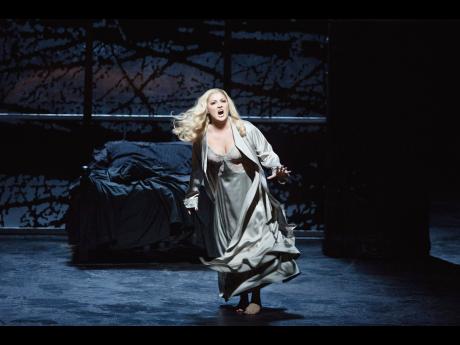 In ancient times Ceylon in a pearl-diving village, a tale of love, betrayal, and sacrifice unfolds in Georges Bizet's The Pearl Fishers. The opera stars Matthew Polenzani, Mariusz Kwiecien and Diana Damrau.

Greed, power and politics surround the plot of this classic tragedy. Zeljko Lucic stars in the title role, along with Rene Pape as Banquo, Anna Netrebko as Lady Macbeth, and Joseph Calleja as Macduff.

Conducted by James Levine, a political struggle is exacerbated by a love triangle with a base of unrequited love. Fenena (Jamie Barton), the daughter of Babylonian King Nabucco (Placido Domingo), is in love with Ismaele (Russell Thomas), the nephew of the King of Jerusalem. Abigaille (Liudmyla Monastyrska), Fenena's disingenuous 'half-sister', is also in love with Ismaele.

Bizet's classic about a Spanish gypsy named Carmen (Elina Garanca), who only lives for physicality and sultriness, manages to seduce the gullible sergeant Don Jose (Roberto Alagna) with her guile. His great fondness of Carmen comes at a high price and costs him everything he once held dear.

Tickets for the Met Summer Encore 2017 are now on sale at the Palace Cineplex Box Office or www.palaceamusement.com

Semiramide live in HD this Saturday at Carib 5
Puccini's 'La Bohème' encores at Palace Cineplex this Sunday
L'Elisir d'Amore is live this Saturday, noon at Carib 5
Tosca | Caught in a net of love and politics
The Met Opera encore: 'The Exterminating Angel'