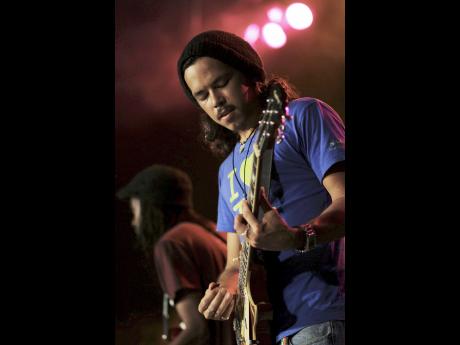 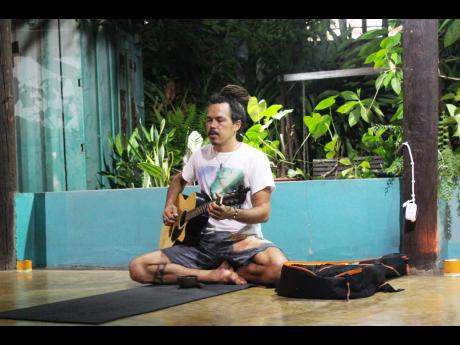 As you enter the gardens of the Afya Studios, Liguanea, St Andrew, the home of Jason Lee Worton's Wednesday evening Roots Rock Yoga class, you quickly feel the positive energy taking over.

Worton, a guitarist known for his association with some of Jamaica's well-known reggae artistes as a member of their supporting bands, says he has been doing yoga professionally for about six years. This is after training with Subhadra of Yoga Angels, but he remembers "being interested in Iyengar Yoga at the age of 10 after finding a book about it".

"Roots Rock Yoga is my Jamaican spin on some core principles of yoga - the foundation of your body in a pose or the part of the body that supports you and your weight," said Worton.

The class begins a little late due to the damp weather. Worton waits a few minutes before beginning the session. Usually, attendance can go up to about 22 persons per session, but he suspects a small class, so he carefully lays only 10 mats. There are also supplementary accessories, such as versatile lightweight blocks, elastic yoga positioning straps and blankets. He then adjusts the lighting.

Worton quickly gets into Suhkasana (or Easy Pose), which is the sitting cross-legged position. He is not without his instruments and soon he removes the acoustic guitar from its case, along with a small Tibetan singing bowl. The soothing sounds of East Indian music can be heard from the entrance and Worton improvises by adding a few notes from Black Hole Sun (a single by American rock band, Soundgarden).

As more students enter, he retires the guitar and turns on the stereo, which now echoes an album by the British Virgin Islands roots reggae band, Midnite. The session is easygoing. with Worton guiding the students through each pose, adding advice on how to achieve it. The poses are focused on spinal alignment this time around.

"Proper alignment and engagement helps us to get deeper and more comfortable in a pose. I find it extra relevant as a Jamaican, roots and grounding or connection to the earth being a big theme in our culture," said Worton.

"So, Roots Rock Yoga captures that idea and fuses it with the idea of music being part of this practise that is aimed at healing and strengthening our connection to our physical and spiritual self," he continued.

Before the session ends, the stereo volume is reduced and comforting guitar riffs, accompanied by alternating harmonic sounds, escape the Tibetan signing bowl as Worton strikes the rim. The bowls are known to be used in religious rituals, yoga practises, for spiritual healing and music therapy. The participants are invited to repeat the sacred yoga chant of 'om' and to focus on the rhythm and breathing simultaneously.

Additionally, the musician has been leading discussion/concert style workshops on 'Sound and Our Relationship To It', which focus on concepts such as nature and the definition of sound and its involvement in the existence of everything. He is also working on two albums, one of which is a Jamaican-Indian fusion dub meditational set.