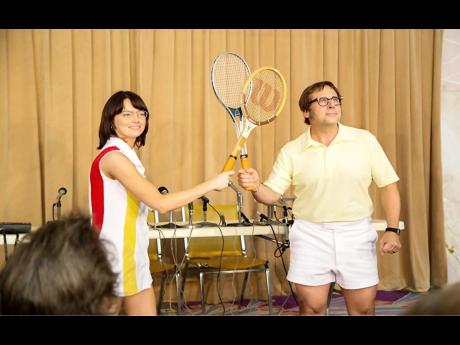 The beauty of cinema is that it can transport you to a time and place you didn't think you could experience yourself - a bygone era that is so different from the times you live in, it feels as though it took place on a different planet.

Battle of the Sexes, a movie about the incredible tennis match between Billie Jean King and Bobby Riggs, does not provide that sense of escapism. The picture it paints feels all too often like a self-portrait of today.

After the 2016 United States election, I can't think of a more relevant film to come out. The qualified and less charismatic Billie Jean King (played by Emma Stone) against the loud, bombastic Bobby Riggs ( played by Steve Carrell) certainly gives a parallel. The beauty of Battle of the Sexes is the way it gives each of these counterparts a sense of identity. They're public figures but, like the best biopics, you leave the film feeling as though you knew them as people.

You watch Billie Jean King go through the same journey as the heroes from sports movies past. The movie does a fantastic job of intertwining her own path with the path of women everywhere. The tennis match itself holds little stake for the characters, but you never lose sight of how important it was for the world.

If I had one gripe with Battle of the Sexes, it's that it at times felt entirely too clean. The film gets into the nitty-gritty of Billie Jean's life, but still feels as though it might've been holding back. The movie loses a sense of genuineness because of it.

Moments come up where you're watching Battle of the Sexes and you'll be hard-pressed to forget you're watching a movie. It's a well-made movie, with great performances and a captured '70s aesthetic, but it never makes you feel immersed in its world.

The movie tells the story of the Battle of the Sexes well. You definitely understand how important it was and you feel the struggle of the characters dealing with the extraordinary position they find themselves in. It's a movie that will no doubt serve as an inspiration to many, even if it feels slightly disingenuous at times.

I'd say it's worth your time, but maybe at a discount.