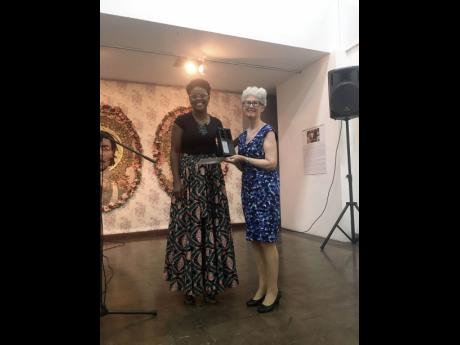 Contributed
Helen Williams (right), winner of the Jean D'Costa Award, with Tanya Batson-Savage, who chairs the Lignum Vitae Writing Awards, at the 2017 ceremony, held on Friday at the National Gallery of Jamaica, Kingston. 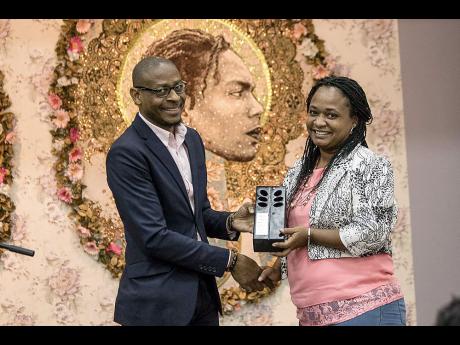 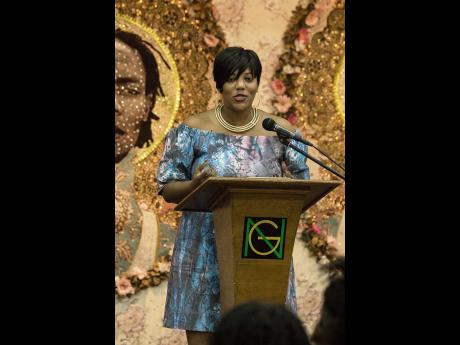 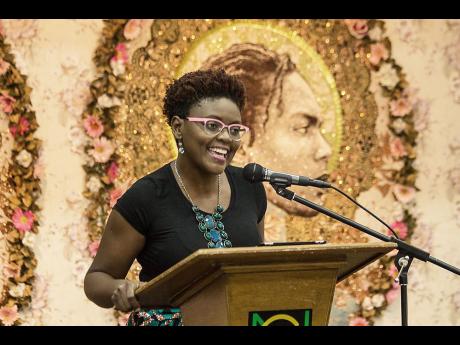 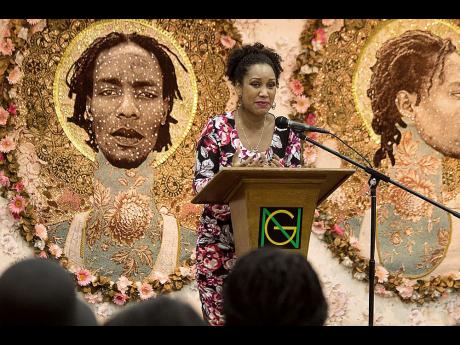 Contributed
Kalilah Reynolds, vice-president of the Jamaican Writers Society (JAWS) and host of the 2017 Lignum Vitae Writing Awards, which took place on Friday at the National Gallery of Jamaica, Kingston.
1
2
3
4
5

Helen Williams was awarded the Jean D'Costa Award for Children's Literature for her work Lost in the Cockpit Country, and the Una Marson Prize went to Garfield Ellis for his work, Land We Love. The Vic Reid Award for Young Adult Literature went without a winner, Dionne Brown receiving special commendation for her collection of stories, Seventeen Lashes.

Presented biennially, the Lignum Vitae Writing Awards are intended to encourage original, high-quality, creative work, and writers at all stages in their career are eligible for entry.

Tanya Batson-Savage, chairperson of the Lignum Vitae Writing Awards, suggested that the implementation and maintenance of programmes such as the Lignum Vitae Writing Awards proves effective and significant on two levels. "One, it's very important for us to unearth and encourage great Jamaican writing at home," she said. "There are several awards around the world, and it isn't a case where Jamaicans can't win, but to honour great writing at home, on the ground. It's important we acknowledge that writing is valuable and not just value in tangible ways. We need to honour creativity intangibly, and yes, it's wonderful and important, but then we don't put our money where our mouths are."

This brings Batson-Savage to the cash prizes. "Most writers don't write fulltime, and that eats away at possibilities. To not have to worry about bills for a few months so you can concentrate on writing will encourage people to keep writing," she said.

"We are extremely lucky in having JAMCOPY (the Jamaican Copyright Licensing Agency) on board. It's a partnership - JAMCOPY provides financial support and the Jamaican Writers Society (JAWS) provides logistics. That is the reason JAMCOPY exists. They had already established a cultural fund," Batson-Savage said. "They are very committed to supporting writing and writers, so it was a serendipitous arrangement. Can there be more support? Yes. In fact, there can be more support for creative arts in general. Jamaica does phenomenally well in creativity despite a lack of support," she said.

"It's interesting that adult writing had the largest number of submissions. That remains consistent. The Vic Reid Award had the second-highest number. It had eight submissions, which is nothing to shout about. It's a clear signal of a challenge in writing for young adults in Jamaica," Batson-Savage observed.

"There don't seem to be a lot of young people who are reading. I don't think enough is being done to generate interest in reading. When I was in Jamaica, I looked in the bookstores, and there are no books, and the libraries are empty," Garfield Ellis told The Gleaner. "People are not writing young adult fiction. I don't think there are a lot of young people writing as a general rule in Jamaica."

Ellis recalled a past staging of the Lignum Vitae Writing Awards, where Diana Macaulay dominated in children's writing. The Una Marson prize-winner, Ellis, who now resides in Canada, last visited Jamaica in June 2016. "I went around to bookstores, and there isn't much of anything. That is where the work needs to be, but it's not viable because the young are not reading," he said.

Jean D'Costa Award winner Williams said: "I feel that young adult fiction is rather new. There are different definitions. For example, the judges said that one of the entries was romance, and that's not a young adult genre. They need to be more specific about what is young adult." Williams believes that in general conversation, young adults are recognised as people in their late teens to early 20, but that age group does not apply when categorising literature.

"The other thing is things change quickly in publishing. First, vampires are popular. By the time they get their story to the publishers, they are looking for dystopic stories," Williams said. "There were only three entries for the children's writers. They have nothing to read, so they're not moving along in that sense. There are more distractions, with TV and video games, tablet games. They are not demanding books. It's a vicious cycle."