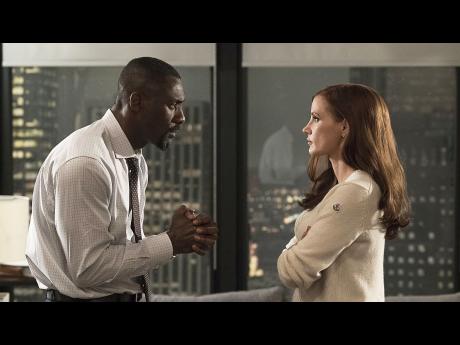 To say that Molly's Game has been done before is a bit of a misleading statement. The film is about the titular Molly Bloom, a young woman who, as the film puts it, "built a multi billion empire"centred around running a high stakes poker game. While the name has changed and the game is different, the film takes its cues from other films that chronicle a swift rise to riches, told mostly in narration by the main character. Think about that same formula, perfected by Martin Scorsese nearly 30 years ago in Goodfellas.

Molly's Game is the directorial debut of famous screenwriter Aaron Sorkin. Sorkin also wrote the film, which is evident by how tight, smart and funny it is. The narration that permeates Molly's Game keeps the film moving, but at times feels like it's used as a crutch. The narrated scenes run on so long I found myself being caught by surprise every time Jessica Chastain's voice wasn't telling me about the difference between a royal flush and a full house.

Chastain, though, delivers one of the best performances of the year 2017. Her character is compelling, but the actress gives her an even more gratifying portrayal. Her co-star is the impeccable Idris Elba, who is so good that the only complaint I have is that he was in the film far less than I would have liked. Both these actors were pitch perfect, but the scene stealer in the film is, remarkably, Kevin Costner as Molly's estranged father who does more with the little bit of screen time he's given than I suspect he ever has.

Perhaps it's because January is a time of year starved for quality film releases. Perhaps it's because seeing a story about ambition and success with a message about integrity being told from a woman's point of view (for once) feels refreshing and important. Whatever the reason, I found myself enjoying Molly's Game. It's a little too long, perhaps a little predictable, but Molly's Game is a solid telling of an interesting story.