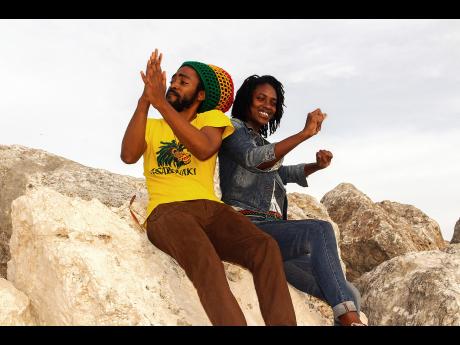 There are any number of songs about the physical dancehall experience (regardless of which genre of music is being played there at a given moment) and, from that perspective, Asadenaki and Aza Lineage's single Rockin' goes over well covered ground.

However, there is variation from the norm as Asadenaki delivers lyrics about the approach to the hot spot, not only about being in the space itself. The format of singer (Lineage) and deejay (Asadenaki) is tried, proven and works the lady handing the hook and Asadenaki the verses of the Goldeneye production, released in early June on the Tuff Gang imprint.

Where some of the value of Rockin' lies is in adding overlooked angles, such as transportation and its sometime compulsory close quarters ("we no min' squeeze, cause de whole a we haffi reach"). He works in the name of a fellow entertainer without it being jarring product placement or cheesy, saying even if you have one pair of shoes "it haffi criss like Martin."

In the lyrics, there is a hint of what he tells The Gleaner about the song when he asks the gateman to "ease up, mek we go shell de place like a peanut." Asadenaki said Rockin', written by both vocalists, is penned from the point of view of someone who is going to the dance to perform. However, it is also a place of release, which holds true in his life. "When you listen the song, it is about dancing and rocking to the music and just being one with the music and the moment. Is letting go of the hard days we go through day to day," he said.

However, there is a holding on as well, Asadenaki relating the performance by himself and Aza Lineage to what he would like to see in the dancehall. 'It is about coupling up in the dancehall again," he said, noting how many times men and women dance separately. "We a encourage couples in the dance, man and woman," he said.

Rockin' is one of a series of singles from Asadenaki, the next planned for close to the end of July when another project should be released. "Right now I am working on a mixtape with some European producers," he said, describing a focus on foundation reggae rhythms. While the mixtape is evidence to promoters of his having material to put on a good live show. he said "we are putting out singles to get Asadenaki known before doing an album." A video for Rockin' will be shot this weekend.