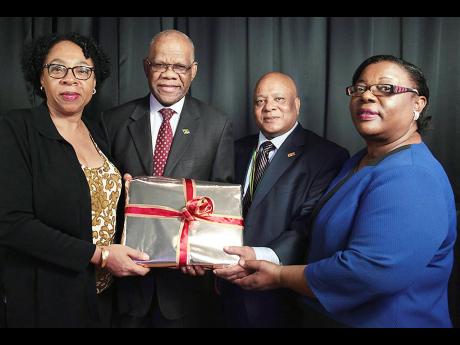 The Medal of Appreciation by Prime Minister Andrew Holness to Anthony 'Chips' Richards, for services to Jamaica in the field of music last April, seemed to have opened new doors for him, while widening his scope of endeavours to keep Jamaica in focus on the international music scene.

He was recently commis-sioned by the National Library of Jamaica, through its Chief Executive Officer Beverley Lashley, to undertake a project that involves the gathering of information about Jamaicans living abroad who have contributed to the restoration of our musical heritage. "When the deal is inked, it will give Chips the authority to be the liaison in the United Kingdom (UK) on behalf of the National Library of Jamaica and, by extension, the Government of Jamaica," Lashley told The Gleaner.

Her deliberations with Richards came during a visit to the UK with a Jamaican delegation in May-June this year, primarily geared towards restoring Jamaica's heritage. While there, she met with veteran Jamaican musicians at a presentation ceremony where she received over 100 items, including records and informa-tion on veteran artistes, producers and musicians. Encouraged by the progress, and learning of Richards' credentials, she decided to utilise his services to collect more information on these artistes to bolster the library's collection.

Richards' contribution to the Jamaican music industry can be described in no lesser term than 'inestimable'. He has been one of the main pioneers in promoting, spreading and disseminating Jamaica's music to various corners of the globe. He has the distinction of helping Jamaican artistes to get into the UK charts, by getting their records into the shops from which the polls are taken. Additionally, he became the first to promote reggae music in Japan in 1976, and two years later, his efforts helped to open a massive reggae market in Africa.