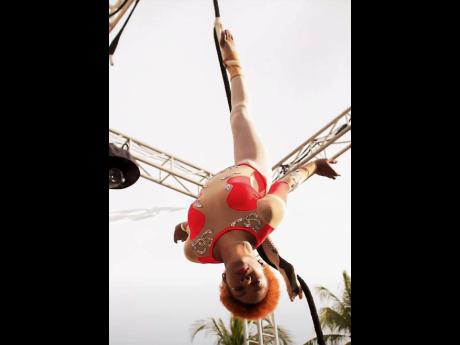 Contributed
The routines involved in aerial acrobatics demands a lot of mental strength. 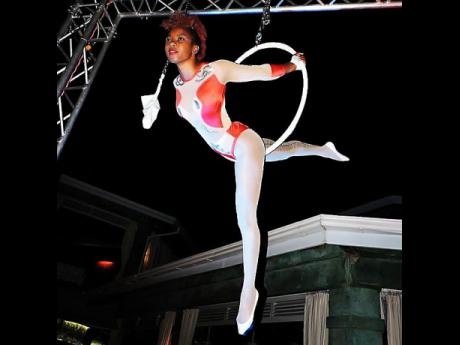 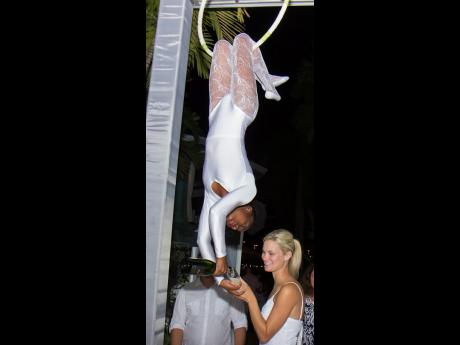 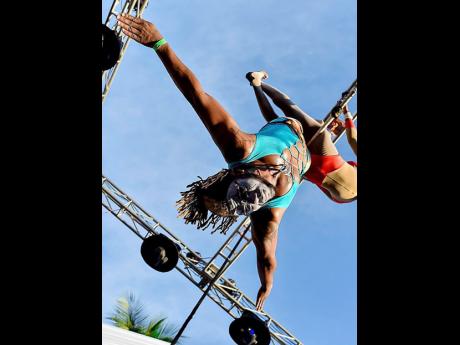 The life of an acrobat starts in the gymnasium, learning the basics - splits and flips - until they can master the harder, hair-raising stunts. But aerialist Sheinnek Mahabee of Soul Dynamics Circus took a different route.

Ten years ago, facing the transition from high school to university, Mahabee was in a place of reflection and decision making. It was at that point that a man approached her in a supermarket, first questioning her about her weight. Any female would have thought it forward, but being a curious 18-year-old, she responded, "I am 90 pounds" and accepted his business card.

"I had no formal training in gymnastics back then, much less aerial acrobatics," Mahabee told The Sunday Gleaner. "I was young, restless, fearless, excited and yes, curious. Plus, I had wanted to go Edna Manley College to study performance art."

Mahabee said aerial acrobatics is not for the mentally weak. At five feet, four inches and 130 pounds, she is flying high, performing with aerial hoops and silks, the Spanish Web (a fast-paced act done using ropes suspended from the ceiling) and various routines on the trapeze.

"It found me at the right time. It put me through university to study banking and finance," said Mahabee, who works as an insurance agent with Guardian Life.

There's no denying it is a dangerous profession, but she has never had an injury. "Every type of act requires different types of muscles, so I constantly exercise and do cardio workouts," she reveals.

Eaton Sommerville, founder of the Soul Dynamics team, says that the training required is mostly to strengthen the body. The individual also has to be mentally strong.

"If an individual is not mentally prepared, then it makes no sense to work with them.

While you can help someone to get the physical strength, if there exists even a small amount of fear, it will be hard," said Sommerville.

Sommerville has not recruited or changed any of the 10 members (two of whom are females) of the team over the years. 'Everybody that is a part of Soul Dynamics has grown with the group," he said.

He added: "It is one of the few, if not the only local circus group comprised of clowns, body contortionists, cyclist, dancers, and acrobats; just the animals have been excluded."

Their major clients are mostly hotels along the north coast and at western end of the island, as well as private events that want to add an element of surprise, such as aerial acrobats pouring champagne into a guest's glass.

The traditional circus discipline is taking flight fast - (pun intended) and both locals and visitors are screaming at the awe-inspiring acts. Taking on the discipline requires just that discipline. The group does not have a set rehearsal time, only those scheduled for learning new routines, and it demands that each member catches on quickly.

According to Sommerville, who also performs, there is no competition locally, although acts from our Caribbean neighbour, Cuba, have been invited by hotels to do a few acts similar to what Soul Dynamics is known for.

"The only area we have not ventured into is the cruise ships, and it has been challenging to book overseas performances because of the demand here," he said.

"Most of our members do have nine-to-five jobs, and then most days, there are two to three bookings."

He admitted that while the performers work all year round, the peak season are between December to January and during Easter and Halloween (Costume parties).

"It has been the most rewarding 15 years to live my dream as an entrepreneur in a field that is not filled with competition," he continued.