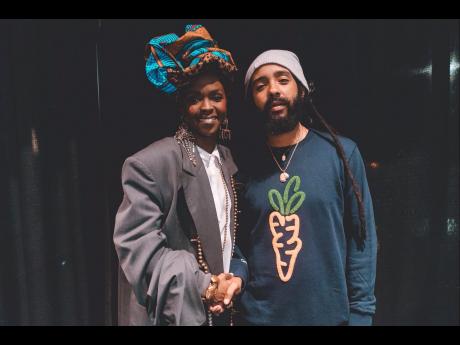 Contributed
Protoje with Lauryn Hill after performing on two dates of the 20th anniversary concert tour of ‘The Miseducation of Lauryn Hill’.

Noted by many music insiders as on one of the greatest album of all time, The Miseducation of Lauryn Hill has stood the test of time. Having kicked off its 20th anniversary tour in the United States in June, local reggae star Protoje finds himself among the lucky ones, and shared the stage with the singer.

Earlier this summer, the In.Digg.Nation leader shared the stage with the elusive and enigmatic Hill.

Protoje was billed to perform with Hill on September 7 in Las Vegas, Nevada, alongside Nas and Iman Omari, then again on September 9 in San Diego, California, alongside Kelela. "We never actually spoke until after my concert with her. I guess she heard my music and thought it was a good fit," he said.

The Like This singer was introduced to Hill through her work with The Fugees. After listening to the group's album The Score, Protoje said he became obsessed with the lyricist. "I thought she was the illest rapper. Then when she did The Miseducation of Lauryn Hill, I saw the whole scope of her artistry. She is truly in a class by herself," he said.

The Miseducation of Lauryn Hill was released to critical acclaim in 1998. It debuted at number one on the Billboard 200 Chart, and earned the singer Grammies for Album of the Year and Best New Artiste. It remains Hill's only solo studio album.

"Overall, I think she is one of the greatest artistes in modern music. It was awesome to perform for her fans, who are real music lovers," Protoje said.

This year continues to be a winning one for the reggae artiste, following his bucket-list performance with Hill. Protoje also launched his first Japan tour, which runs from September 15-24. "When people from a different culture show you so much love, it's such a feeling. Man, I'm in Tokyo now and the love is crazy," he tweeted on Sunday.

Protoje will make his way across the Land of the Rising Sun alongside selector/producer Yaadcore on the A Matter of Time - Dubwise Tour.