Story of the Song | 'Ryddim Ravings' comes complete in the night 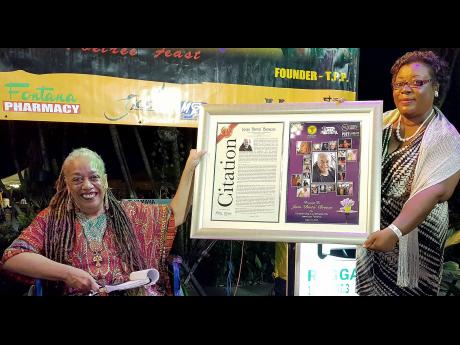 On Wednesday, October 10, poet Dr Jean Binta Breeze will receive a Silver Musgrave Medal at the Institute of Jamaica. She began writing poetry in the 1970s, initially having Dennis Scott at the School of Drama look them over and then Mervyn Morris (the University of the West Indies (UWI), professor emeritus, who will also receive a Gold Musgrave Medal at Wednesday's ceremony. Her first collection, Ryddim Ravings, was in 1985 as part of a double debut, as the album Ryddim Ravings was released by USA label Roin Records in the same year.

The name of the poem that gave Breeze's first book and album their titles is a bit longer as it is subtitled The Madwoman's Poem. It came to her in the still hours well before dawn as a complete poem except for one line - the closing nod to sound system patter, "haul an pull up, Mr Operator."

"I was recovering from a long bout with schizophrenia," Breeze told The Sunday Gleaner. I had just returned to work as national co-ordinator for speech and drama at the Jamaica Cultural Development Commission (JCDC). I was living in Kingston, and I got up and wrote it straight through at 3 a.m. I remember reading it over and crying."

While there was no specific incident that prompted the poem, Breeze said that on the morning she wrote it, "I woke up and I literally heard a voice playing in my head 'I will give you one'. And I got up and got my pen and paper and wrote. I just wrote it. It was straight through me from pen to paper."

As naturally as Ryddim Ravings came to Breeze, she was hesitant to record it. "I was going to do an album. I was unsure if I should put it on it. It was a long and wordy poem. I decided to go ahead, and the band put a reggae dub behind it." She said that Ryddim Ravings was recorded in an afternoon session at Music Mountain studio and did not take long to be committed to posterity. "They called me one-take Breeze," she said as it often took one attempt to get the vocals done right.

While recording was easy, reading the poem for other persons was another matter as there was an open showing of the tears, which followed its writing. And Breeze also saw the impact of Ryddim Ravings on other persons. "I remember the reaction when I did it in public for the first time," she said. A Mrs Buddhi hosted a gathering at her Wellington Drive, St Andrew, home, Breeze describing it as a "kind of yard poetry reading". "When I was reading it, I was crying. You know who came up to me and said, 'My God, Breeze! You know that poem....'. Ibo Cooper," she said.

As popular as Ryddim Ravings became, at one point, Breeze, who counts Third World Girl among her other poetry collections, stopped performing it. "I had put it down for years," she said. Then came a Lifetime Achievement Award at the Jamaica Poetry Festival in August this year, and, she said, "I decided if I am going to do one poem that sums up so much of my dub poetry over the years, it would be that one."

She is still surprised at the poem's popularity n England, where it has been published in many anthologies over the past two decades. And this is despite her hesitance to perform it there if there isn't a strong West Indian presence in the audience. "I had to explain so much," Breeze said.

Ryddim Ravings' has had fresh legs as a recording after a request in Italy while Breeze was on tour with the Dennis Bovell Dub Band about five years ago. The band, along with a techno dub producer, that version is on the album Eena Mi Corner.