Strictly the Best Live – A lot of quality 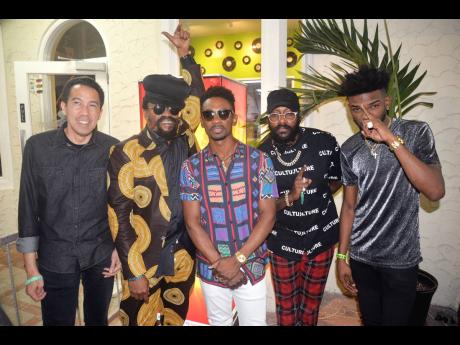 Evening showers did little to dampen the parade of VP Records ‘Strictly the Best – Live’ concert, hosted at Usain Bolt Tracks and Records in Montego Bay on Wednesday.

The star-studded multimedia concert also functioned as the local launch of Strictly the Best Volumes 58 and 59, which both feature 14 tracks of the latest and hottest reggae and dancehall songs, respectively.

Local and international celebrities came out in their numbers to support the New York-based label, which is also celebrating 40 years of nurturing and promoting reggae and dancehall music on the world stage.

The by-invitation-only concert featured guest appearances from the likes of Beenie Man, Shenseea, Christopher Martin, Tarrus Riley, Mykal Rose, Romain Virgo, Jah9, Teejay, and much more. British singer/songwriter Estelle also made an appearance and shared the stage with local acts such as Tarrus Riley, performing their collab,Love Like Ours. Romain Virgo literally had the audience eating out of his hand with his extensive catalogue, while Jah9 got the crowd grooving toLove Has Found I before Teejay turned up the tempo with one of 2018s biggest hits,Uptop Boss.

Tarrus Riley returned to the stage with Mykal Rose for the currently globally trendingGuess Who, which was matched by ‘The Doctor’ Beenie Man’s stellar performance that culminated with him and Christopher Martin and their soulful rendition of Tenor Saw’s Lots of Sign.

“We have to find different ways to promote and market the music now,” he said adding, “we are trying something new because this is not only about the launch, but also about a multimedia experience. We have to change in response to the whole digital distribution era, and one way to do this is by us taking Strictly the Best live. We are live on YouTube to nine million viewers across the world. It is our greatest album launch ever.”