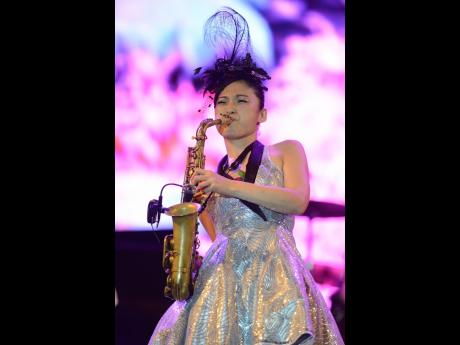 She is no stranger to Jamaica, but when Japan-born saxophonist Megumi Mesaku performed at the third annual Red Rose for Gregory concert in New Kingston last week, her performance was outstanding enough to ignite calls for an encore. With much spunk and fervour, Mesaku impressed the crowd with her rendition of Gregory Isaacs’ Number One, Soon Forward and Night Nurse before attracting screams through her performance of his 1974 hit, Love is Overdue. It therefore comes as no surprise that the musician is working on a tribute album to the ‘Cool Ruler’.

“It started when I was contacted by Linda Isaacs from the Gregory Isaacs Foundation to perform his song Front Door at an event,” the 44-year-old musician told The Gleaner. “I asked my producers, Mafia and Fluxy, to create a riddim track for me because they used to work with Gregory a lot. It was after that we decided to make a tribute album. I’m actually in the finishing stages now because we want to release it sometime in the summer.”

Mesaku is concurrently working on another album called Saxy Rocksteady, a fusion of roots and dub music also produced by British producers Mafia and Fluxy. That project is set to premiere in May with 14 songs.

“I’ve always loved rocksteady,” she said. “When I was a teenager, I started clubbing in Tokyo, and that’s where I heard plenty of ska, rocksteady and early reggae music – that’s when I fell in love with Jamaican music.”

A native of Soma City, Fukushima, Mesaku started playing the saxophone at the age of nine and was an active member of her school’s marching brass band. She credits her love for music to her father’s side of the family, noting, “My grandfather was an art and music teacher and my uncle was a professional trumpeter when he was young, so my parents have always supported my love for music.”

She migrated to the United Kingdom more than two decades ago and joined the group Ska Cubano, but said, “I am not playing for them as much as before because I am concentrating on my solo career.”