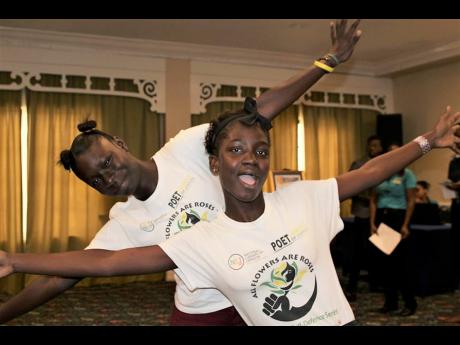 Stephanie Lyew
Amra Miller (in front) and Ramona Mortley, participants in Lorna Goodison’s All Flower Are Roses: Poetry and Self-Defence Series, share their excitement to be at the Knutsford Court Hotel for the celebration of World Poetry Day.

In recognition of National Poetry Day on March 21, the National Library of Jamaica (NLJ), in association with Poet Laureate Lorna Goodison, hosted the second cycle of its celebration and award ceremony for local poets at the Knutsford Court Hotel in St Andrew.

Under the umbrella of World Poetry Day, first adopted by UNESCO, the occasion has been utilised as a platform to honour poets; revive oral traditions of poetry recitals, and promote reading, writing, and the culture of poetry.

According to Abigail Henry, NLJ’s director of special programmes, the celebration of World Poetry Day locally has created a major impact on the Literatures in English curricula in schools and the general interests of young writers across the island.

“The programme is seeing growth. That is what is important, and the NLJ is really excited to move forward with its plans for the next World Poetry Day celebration,” Henry said.

She revealed that the plans consist of a long-term goal to publish the work of candidates past, present, and future by compiling their poems in a book by the end of the Poet Laureate’s term in 2020.

Following the announcement and presentation of the winners in each category, members of the Diplomatic Corps, Katherine Farrell, the acting consul general at the US Embassy, Amparo Gonzales and Victoria Garcia-Ojeda (both of the Embassy of Spain) payed tribute to the work of poets from across the world, including Claudio Rodriguez’ Ajeno and Langston Hughes’ Let America Be America Again.

Minister of State in the Ministry of Foreign Affairs and Foreign Trade Pearnel Charles Jr, also delivered one of his favourites, the Farmer’s Prayer by Judith Hamilton taken from In This Breadfruit Kingdom – Anthology edited by Professor Meryvn Morris.

However, the notable presentations for the ceremony were of three young women who participated in Lorna Goodison’s All Flowers Are Roses: Poetry and Self-Defence Series, the youngest being 11-year-old Priyanka Paharsingh, who recited a self-titled poem. Amra Miller and Ramona Mortley did poignant pieces on the topic of abuse titled No Means No and Senseless which had the guests recapping the words for several minutes after they left the podium.

The Poet Laureate could not contain her delight as she gave the aspiring poets a warm embrace following their recitals. In her remarks, Goodison shared, “While growing up, I never knew anyone that was an actual poet. I actually thought poets came from England and that they were white and mostly men because I was not taught poetry by a Jamaican or a black person or a woman.”

Speaking to The Sunday Gleaner, she said: “A lot of young people are afraid of poetry. They think it is a plot to make them look stupid because, especially for exams, there are specific readings of what each line means and often, they are told that their interpretation is not correct, but there should be a difference in teaching poetry for the purpose of sitting examinations and for the pure pleasure of it. That is what these ladies and upcoming poets are learning.”