Kristofer Madu has a mission and the music for it 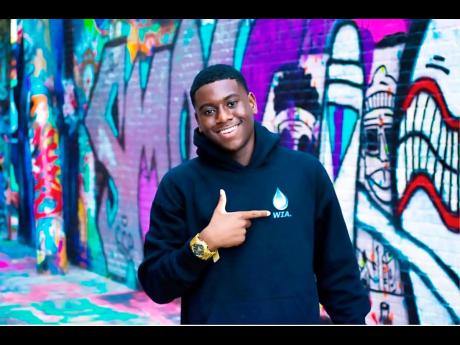 “Rather than controversial, the choice in topics and titles of my music are more on the provocative side,” explained Kristofer Madu to The Gleaner, during an interview that would later unearth the Kingston-raised rapper’s true mission.

Madu has a multilayered past. Born in Nashville, Tennessee, to a Jamaican mother, Dr Dainia Baugh, and a Nigerian father, Dr Ernest Madu, he was, by design, part of a multicultural household, and spent majority of his childhood in Jamaica. He became exposed to a diverse mix of music from reggae and dancehall to hip hop and pop.

Quite likely influenced by his Jamaican lifestyle, Madu’s dream was to become a musician and mogul in the field of entertainment. Prior to returning to his birthplace for high school, he made his official début as a singer, at the age of 11, under the stage name K. Titan. His song was titled Till The Day I Die. The music video, which was produced by Xeno Bogle, featured a cameo by Ky-Mani Marley and garnered over 50,000 views and thousands of streams.

According to Madu, growing up in Jamaica did a lot for him by expanding the way in which he views the world. “It taught me not to view the world from a perspective of privilege,” he said, adding that he is driven by the desire to change the way the world views poverty and to challenge the stereotypes.

“I want to show the world that there is more to a black man, especially in the US, where race plays an essential role in a man’s existence. And, with my career goals, I want to show that there is more to a rapper,” he said. “The past four years have done a lot in that regard. I have seen progress with my various initiatives; call it a roller coaster if you may – a fun one.”

Water Is The Answer’

One of those initiatives is Water Is The Answer, a non-profit organisation which Madu launched while attending high school in 2015. Back then, social media played the major role in spreading the word about the charity, whose purpose is to scout communities in need, raise funds through online donations and coordinate the construction of the wells. In its first year of existence, it obtained US$10,000 via a GoFundMe campaign.

“Today, with music as my main platform, I continue to release songs, albums and videos to spread awareness. The same approach used for fundraising is the same approach used in the music industry, that is, to try and get persons to listen in order to raise the capital,” the Johns Hopkins University sophomore, majoring in International Economics and International Studies, said.

Madu is currently making waves with shape-shifting lyrics that transition from aggressive metaphors as loud as the 808 electronic drum kicks on tracks like Ice and Snow to a purring vocal cruise on soft instrumentals in Stars and Clear Skies.

Performing under the stage name Travis Karter, he has three albums and several singles. And, since maintaining a global perspective has become a way of life, that is reflected in his music, which he has been recognised for by his own university’s magazine, as well as the publications of the Harvard and Cornell universities.

So central is this global perspective to his career aspirations that 100 per cent of the proceeds from streaming, records and merchandise sales go to support ‘Water Is The Answer’. Madu maintains that the two wells constructed in Arondizuogu, Nigeria, with the funds raised three years ago is only the beginning.

“I am constantly trying to figure out what I can do with my art and the financial gains from my music that will benefit the world,” he pledged.

Having already donated to the place that serves as part of his cultural footprint, Madu has plans to give back to Jamaica. He intends to “bring it back to a country that did so much for (my) identity.”

Madu is currently involved in a project to raise money for the purpose of establishing improved water facilities at the Maxfield Park Children’s Home in St Andrew. He anticipates that with the latest album, titled White Panther, a scholarship fund can also be established to provide school supplies for children in need.

“Jamaica is, and always will be, a big part of my life,” he emphasised. “On the music side, I am working on expanding my catalogue by collaborating with dancehall artistes.”