‘Shake It’ with Keida 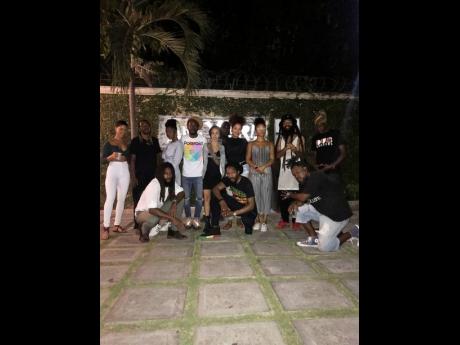 Contributed
Keida (centre) surrounded by some of her friends in the music industry, including Kabaka Pyramid (stooping, centre), Lila Ike (fourth right) and Sevanna (third left).

Reggae artiste Keida has beaten writer’s block, and is back in the game. She has partnered with the multifaceted producer and artiste Roe Summerz, and intends to make a splash on May 10, with the release of the baile-funk/reggaeton inflected dancehall fusion track, VAI.

In an intimate setting – nestled in the backyard of the world-famous Big Yard studio in Half-Way Tree – on Tuesday night, the singer gathered some of her friends and supporters, who happened to be some of reggae’s hottest contemporary acts, to a private listening session for the upcoming release. Among her supporters were InDiggNation siren Sevana and their freestyle champion Lila Ike; along with globetrotting selector Yaadcore; the ‘Small Axe’ Jesse Royal; and leader of the Bebble Rockers, Kabaka Pyramid.

The young artiste last year scored a major feature on Christina Aguilera’s 2018 album Liberation. She was featured in the single Right Moves, which also featured Shenseea. With her new project, Keida is hoping to break into the South American market. Summerz told The Gleaner, “The target was really Brazil – to use the Brazilian culture and mix it somewhat with reggaeton, with a little bit of island vibe … and then present something. Somebody needs to represent Jamaica in places like Brazil. Jamaicans nah really represent like they should. I just wanted her to be the one to put the mark over there.”

For Keida, it’s less about the market and more about exploring different cultures. “It’s like when you hear the kette drum, and hear what we have to offer as Africans, as roots people. You explore different genres and get different styles that are amazing when you meld them together. Everybody has their richness, and then you fuse that into something unique,“ she said.

She told The Gleaner that working with Summerz was what cured her writer’s block. “He really gave me a different perspective on how to look at it. Just how to detach yourself from the present moment and freely express yourself. Just free up! That’s something that I struggle with as an overthinker and as a perfectionist. As somebody who explores his ‘multitalents’ to the full extent, I really took inspiration from that.”

Summerz is also a recording artiste, who has to his credit music released with the inimitable Tommy Lee Sparta. “And I’ve been doing a lot of productions with up-and-coming artistes. But for some reason, throughout my music career, it’s like Keida always popped up in little places. Until one day, a close friend of mine, Woodrow Whyte, brought her to me, and it was perfect timing. I’ve been preparing for situations like that, and right now I’m getting some real good productions out of her,” the producer said. Though Summerz is more known for Afrobeat productions, his partnership with Keida has spawned a sound that should play well in South America. “Vai is Portuguese for ‘shake it’,” he translated.

VAI will be the first single of Keida next project exclusively produced by Summerz. “It’s five to seven tracks, we haven’t really decided on that yet. The other releases are exploring different sides of me – not necessarily different genres, but channelling a side of me that I really had a hard time channelling. And I think I found the right producer to do that, so I’m excited. I’m a perfectionist, so when I say I’m excited, it means I really feel good about what’s to come,” Keida said.

She added, “Even as a musician, I’m a visual artist as well. He just totally encouraged me to be myself, and express me to the fullest. That’s something I felt like I always needed permission to do. I think I’ve definitely overcome that mental block. I’m definitely excited about what I do from here on out.”