The Value of Vinyl - Bobby Blackbird keeps it original 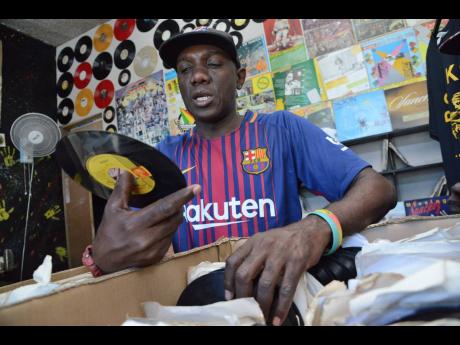 As most musicians are focused on growing their Spotify, Apple Music, or Deezer libraries, there are still those who prefer the analog ­approach to music distribution. Behind the advent of MP3 ­players, compact discs, and cassette tapes, there were vinyl records. These, today, are seen as a collector’s item ... and for young producer Nicholas ‘Bobby Blackbird’ Deane, pressing his music on vinyl was paramount to fulfilling one of his dreams.

As a member of the eclectic, experimental group Equiknoxx Music, nearly losing his life in a motor vehicle accident in 2015 was the jolt he needed to stop delaying and produce The Master Blenda – a ska riddim played by a full live band – then pressed on and ­distributed in vinyl.

This first instrumental project from Deane was conceptualised in 2015 after choreographer Liane Williams needed theme music for her dance documentary ‘5, 6,7, 8 Diaries’. Starting life as a voice note, the ska tune was fully conceived in Deane’s mind from keys to horns.

That tune was almost stillborn when he met in a near-fatal motor vehicle accident in July 2015, leaving him hospitalised and bed-ridden for almost three months. In the midst of his ­recovery, Deane felt a sense of urgency to produce what he had been putting off.

“I procrastinate. I have really good ideas but never do them. This is an execution of things I want to do. I wanted to paint; I wanted a full live band; I wanted vinyl – and I did it,” Deane shared with The Sunday Gleaner.

“When I got out of the hospital, I was home for another few weeks. I just decided to call dem man yah and make we do this thing,” he said. Deane described a scene of him hobbling around his home with pins jutting out of his arm, ­playing the maestro though partially ­incapacitated by casts and slings.

“That was fun. It’s different from what we’re used to. Everybody is digital, but this is something I did the old-fashioned way. Even in the recording, it’s a full live band – all in the studio,” Deane shared.

Giving it an even more personal touch, The Masta Blenda’s cover art is a self-portrait Deane drew then added water colour paints. As an art lover, he made sure to include the piece as part of the package for the project.

Deane says he finds value in the tactile experience that comes with playing vinyl records. It’s almost romantic. “It’s not a matter of saying – if it’s not digital, it’s not real. But moreso, it’s about having something tangible. You’re looking at something physical. Take it out of the sleeve ... you can smell it, you can hear the needle go on. That has a little magic and adds a bit more value,” Deane explained.

Rockers International vinyl shop manager Ainsworth ‘Mitchie’ Williams agrees that there is value in vinyl – both in the listening experience and in the international marketplace. “If you have a room full of it, and you never save any pension, you can pay your pension from that,” he opined. As a result of there being no functioning pressing plants in Jamaica, when new vinyl projects are released, it costs Williams at least US$50 to bring one disc to Jamaica.

Deane isn’t concerned about the cost. “These choices are not financially motivated. I’m not sure if it’s going to be profitable – I hope it will be. But it’s not my primary focus. It’s a labour of love that I’m happy to flesh out,” he said.

Though they seem few and far between, there are vinyl ­collectors who travel far and wide to grow their libraries. German Yaron recently visited Rockers International to add to his ­collection. For him, the value of vinyl comes from listening to a production from start to end.

“The main thing is, artistes put a record out, you listen to songs that you may have never heard, and they do a single out of it. Maybe it’s not good for you the first time you hear it because they’re not easy listening. But then after a while, you hear them again and again – on a record. Then you have to get up, turn it, and press start again. Then you sit back down and listen to the music. It makes a big difference,” Yaron explained.

The Master Blenda was pressed by Rubadub Music and Technology in Glasgo, Scotland. The record was mixed by Olo Mothashipp in Warsaw, Poland, and mastered by Nick Sinna in Manchester in the United Kingdom. The Equiknoxx crew went genuine dub on Side B, ­dicing the vocals of Exile Di Brave with the reverb-laced punches led by Jordan ‘Time Cow’ Chung, Gavsborg, and Deane himself.

Inspired by a dancer, made by musicians, and packaged by an artist, Deane believes that The Master Blenda, from concept to the vinyl player, is true to its name.