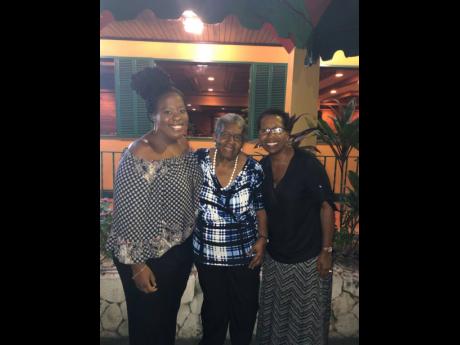 Karen Smith is from a musical family. Her mother Barbara plays the organ, and has been the organist at the St James Parish Church for over 30 years. Her 24-year-old daughter Courtni Jackson is studying music performance in jazz and popular music, specialising in voice at the Edna Manley College of the Visual and Performing Arts.

Like her mother, Courtni also switched her career focus. She was studying for a degree in entertainment and cultural enterprise management at the University of the West Indies, Mona, before she switched. “I realised it wasn’t practical for me. I am someone who is not a big fan of school, so if I am going to attend, it has to be practical and fits me perfectly, and nothing fits me better than music,” Jackson told The Sunday Gleaner.

Smith was a banker before she hit the big stage, having since won nine Jamaica Music Industry Awards; performed on the same stage as Natalie Cole, Seal, Air Supply, Ray Charles and Harry Belafonte. “There are so many things about Courtni that are similar to me. From very early on, people would ask her, ‘Can you sing like your mommy?’, and she would respond, ‘I can sing better than my mommy.’”

Smith recalled that while performing on stage, a four-year-old Courtni would be dancing at the front of the stage. “She was like an exhibitionist and she wanted to be complimented. I always made sure to tell her, make sure it is the love of the performance and not the compliment that you are looking for,” Smith quipped.

At home, Jackson was always surrounded by music, listening to some of the artistes in her mother’s collection, plus her father’s entire songbook, which had the likes of veterans Toots and the Maytals, Desmond Dekker and the Melodians. Smith is married to legendary rocksteady architect Jackie Jackson.

Because of her influences, Courtni admits to having an old soul. “Outside of the tremendous inspiration of my mother who connects with her audience and enjoys herself, I too was inspired by my grandmother, who played classical music to soothe me at nights while I slept.” Her grandmother she says would always play the album Classical m usic for p eople w ho h ate c lassical m usic. Barbara’s influence was also not lost on her daughter, who remembers listening to Diana Ross and the Supremes on a Phillips portable record player, and standing over her mom while she played the piano.

“She had a mammoth song book and I would learn the songs from that book,” recalled Smith.

After Smith became a student at St Hugh’s High School, her experience was enriched by some of the most incredible music teachers in the country at the time. “The likes of Barry Davis, Lloyd Hall, Geoffrey Shields and Ester Pilgrim,” said Smith, adding that the music came alive for her then, and today the St Hugh’s High School girls are still her favourite audience. “They clap the loudest years later,” she laughed.

Her daughter’s path, Smith said, will be different from hers. Jackson is writing music, and does background vocals for up-and-coming artistes. Jackson and Smith did a performance in Florida last November for the Church of the Holy Family, and Jackson wrote the song they performed. The mother-and-daughter duo started sharing the stage when Jackson was in high school. “When we are on stage together, it is a wonderful dynamic for me and I feel so much love and pride bubbling up. sometimes I have to say to myself, relax, hold it down,” said Smith. But for Jackson, it is a different kettle of fish. “When I am on stage with my mom, I feel comfortable but pressured, because I don’t know what to expect of her. She likes to gush about me and that can be quite embarrassing.”

The two boast of an extremely close relationship. “This was the same with my mom when I was growing up,” said Smith, adding that even today, she and her mother are ridiculously close. “That is very important, because the foundation is critical. You can count on somebody’s love,” she notes, adding that her daughter paid her a huge compliment recently. “She says that I love her unconditionally and that means a lot to me,” said Smith.

Barbara said she saw Karen’s potential from as early as three years old. “She said she wanted to be on stage when she grew up,” Barbara recalled, adding that she thought her daughter meant acting. “I see a lot of me in Karen, her ability to care and give to others. And my granddaughter Courtni says I am her twin. She says the only difference between us is the age.”