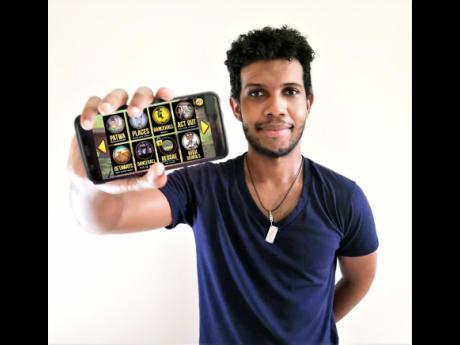 Whether you choose to pass or play, there is no escaping the fact that as technology advances, many of the popular means of entertainment will soon cease to exist. As a result, there is a growing market for traditional games recreated for the digitally ruled era.

One Jamaican man is trying his hand at keeping both children and adults tuned in to local traditions and cultural facts by melding the two to create an interactive game application called Jamdung. It is similar to the game of charades that requires the main player to solve trivia from hints given by other players without saying the actual word.

Mobile app developer, Sheldon Levene, will tell you the lack of public amusement facilities motivated the idea to create an application that attracts both the young and the young at heart.

“There were more attractions for children and families back in the day. I remember going to places like Coney Park out by Ferry (St Catherine) and Coconut Park that used to be at the Hope Botanical Gardens, but other than going out to have a meal or drink, games nights is another activity that used to have a lot of impact. Unfortunately, it is slowly losing its appeal,” Levene told The Gleaner.

With the advent of traditional board games like ludo, dominoes and checkers being available online, many youngsters are inclined to play solo or against another player using the application downloaded on to a computer and cellular phone.

Levene said, “It boils down to apps and there is not much culture-driven apps marketed to the Jamaican audience. There’s a wide range of games but nothing we can truly enjoy and learn from.”

The Jamdung app has the potential to change this, he says. “Persons are already sharing positive feedback and reviews following downloading to their mobile phones – which is mostly free.”

There are over 20 card decks categorised by elements of Jamaica’s history and cultural, including Patwa Words and Phrases, Kingston Road Name, Dancehall moves, Reggae, High Schools, Food, Places and Getaways. Some categories, including the Sports, Reggae, Dancehall Songs, Ska Musicians and More Patwa decks, are locked and require a payment of US$2.99 to open each or remove all advertisements.

Approximately 3,500 Android users have downloaded and made use of the app, according to Google Play, and the number of Apple users is coming close.

Although Levene’s previously introduced application, Jamaicans Be Like, did not get half the attention that Jamdung has received, it also focused on culture with a set of mini games like Pick the Coconut, Free World Boss (a sort of tribute to Vybz Kartel) and Squash the Mosquito. Persons who have visited Jamaica can actually try their luck with the latest app.

“It shows the group the answer while the main player has to hold the phone on their forehead and guess what is on the screen or choose to pass; the feature that will affect how the game is played is the mobile phone used. The phone must have a gyroscope sensor like Samsung Galaxy phones, S6 and recent models, and most iPhones that can allow the players to skip or move on to the next, which is done by moving the phone up and down,” he explained.

He added, “Once users get past the required features, it is an open field for participants at a games night to create their own way of playing, whether in one group or more.”

The app is constantly updated to coincide with mobile software updates and the developer has promised to add new decks, as the demand increases.

Levene does not want Jamdung to be the only game application of its kind to promote culture, and urges, “Developers can try to do more. Although it is really hard to launch an app like this, if you really put your mind to it, do the necessary tests and engage the people, then it can be done and money can be made. It just requires targeting a certain demographic, specifically youngsters who can learn more from interactive games.”