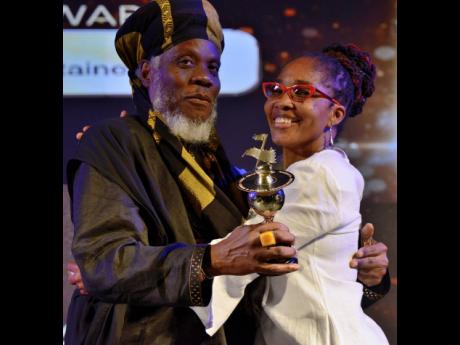 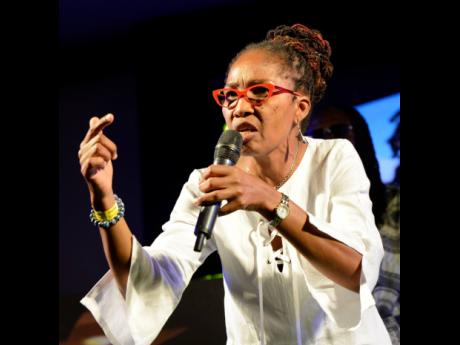 While dub poet Cherry Natural was not surprised that she actually won the Mutabaruka Award for Best Spoken Word Poet at the recent International Reggae And World Music Awards (IRAWMA), she told The Gleaner that she didn’t really have high expectations.

“In this environment, sometimes you don’t really know what to expect,” the author, motivational speaker and self-defence instructor said: “I have been doing this thing for years and years, and one of the things I was really glad for is that everybody said that they expected me to win.”

Regarded as Jamaica’s leading female performance dub poet, Cherry Natural is known for her incisive, fiery, social commentary using metaphors and phrases designed to captivate the listener. She enjoyed a successful year in 2018, which saw her writing a lot of new material, launching another book, and even doing a school tour, in between other performances, both locally and overseas. “In August, I had the launch of my third book. The title is The Lyrical Contortionist, and it is a collection of my latest works,” she explained.

Although she is delighted at the response from her latest body of work and her most recent award, perhaps eclipsing that joy is the fulfilment from performing for, and interacting with, students on the school tour which she did last November. Organised by another Jamaican poet, Malachi Smith, who now resides in Florida, the group visited Campion College, Spanish Town High, Kingston Technical High, The University of the West Indies, St Elizabeth Technical High School and Clarendon College. “The purpose was to inspire and make the students aware of how poetry can impact their lives. Seeing poetry live is different from the textbook poetry. The students were hearing metaphors from things around them; the imagery is something they can identify with and they really appreciated it,” the dynamic performer stated.

Cherry Natural, who also has a black belt in martial arts and is a certified martial arts instructor, found a way to combine her passion for poetry and the spoken word with the discipline and techniques of martial arts to present a complete package. “I got my Instructor’s degree in 1987, and I have been teaching ever since,” she said.

The summers of 2017 and 2018 saw her working alongside Jamaica’s Poet Laureate, Lorna Goodison, at a camp for inner-city girls, held in collaboration with the National Library of Jamaica. Emphasising that she is huge on female empowerment and pointing out that many of her poems speak to this, she said that she was especially happy to participate in this project. “It was part of her (Goodison’s) Poet Laureate Programme, and I did the self-defence part. The energy was great,” she said, adding that she is not yet sure if that project is on for this summer.

However, with the assistance of marketer Lois Grant, Cherry Natural is now busy preparing for her own martial arts, motivational speaking and poetry therapy project, ‘Mek We Do Su-uum’, which will be touring a number of schools starting in the new academic year. She explained that the idea for the series came about during a period when everyone was talking about the lack of discipline in schools, but nobody was really doing anything about it.

“So, we made the decision to do something. As the representative for the Caribbean and the Poet In Residence at a project in the UK some years ago, one of the duties was to go into schools, colleges, mental hospitals and conduct workshops and use both martial arts and poetry in getting certain messages across. I intend to use the same techniques that we use overseas on our students here,” she said.

“The schools will give us about 45 minutes to present,” she explained: “The students will be taught how to practise self-discipline, how to write what they feel and bring their own experience to their writings, and they will also be given tips on self-defence.”

Cherry Natural, whose collection of works has been used as the basis for a PHD thesis done by Professor John Guluska at Indiana University, also regularly visits that institution to hold workshops.