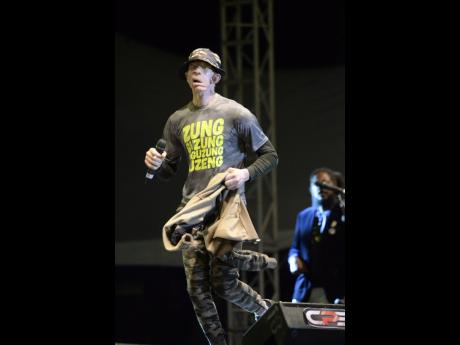 WHILE earning the unofficial title of ‘rudest dancehall toaster’ for his audacious yet clever lyrical style that was not fit for airplay in the ‘80s, Winston ‘King Yellowman’ Foster, was also an advocate fighting against war, started marching to the tune of socially conscious music.

Recovering from a life-threatening illness not only left Yellowman with a disfigured jaw but inspired the lyrical evolution of the Nobody Move, Nobody Get Hurt veteran entertainer – an evolution that made him stronger spiritually and vocally.

Soon, the most popular statement to come out of his mouth was not of the more sexually provocative lyrics but a shout of “no more war” that would began a set speaking more on global issues.

Yellowman asserted, “I had always spoken against war and use of weapons ... I am an anti-war man from long time. I am a man who don’t like the fuss.”

Years of touring consistently all over the world, he said, “Have also taken me to a lot of areas labelled as war zones and even seeing pictures in the news,was heartbreaking”.

The artiste recalled travelling through Germany in the earlier years of his career; where because of the political divide, he and his team were forced to travel longer routes to get to where they were going.

“I was actually in Germany during the period of the Berlin Wall coming down, and it was a celebration,” he expressed.

The reggae-dancehall luminary has produced tracks like World War (2009), which also featured George Nooks; War, War, War (2000), and Gun Man (1982); which was actually the single that was widely accepted in street dances. Surprisingly, unlike the ‘bad man’ tunes that ruled the ‘90s , Gun Man reflected a serious fear that people, including the artiste himself, had concerning where weapons were being sourced.

Although most of Yellowman’s songs which lament war or promote peace are not as popular as the singles I’m Getting Married in the Morning and Zunguzungguguzungguzeng that brought him worldwide acclaim, they are named among the socially conscious material of the artiste’s catalogue that led to his rise in the mid-1990s on the international stage. Continuing on the path of anti-crime and violence tunes, Yellowman has shared No More War, which he co-wrote with his daughter, K’Reema, and released one month ago under the Yellow Baby Records label.

“I am not always sure the people are listening, but I would hope it reaches the ears of someone who can make a change; the people definitely sing it like they would sing Zunguzungguguzungguzeng,” he said. “Still, I just need to emphasise that I am not complaining to the leaders but I want them do more because a little country like Jamaica should never struggle to break away from crime and violence. We need to return to a time when a police only needed to carry a baton to serve and protect, when dance can start at eight o’clock and go on until you say when, and people house never have no grille.”

After his absence from the dancehall scene for over a decade, Yellowman is ready to shine in the spotlight once again with songs preaching a similar message. He is particularly thrilled that he is hitting the road with his daughter this week and collaborating with her to release new music. The father-daughter duo will open their one-month US tour on July 7 starting in Florida and then on to Milwaukee, Seattle and Chicago.