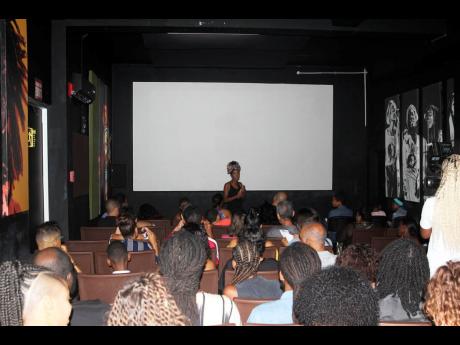 It wasn’t the typical movie night with popcorn or nachos and cheese but the Jamaica Film Night 2, hosted at the Bob Marley Museum in St Andrew last Saturday by the GATFFEST Film Festival and Bob Marley Foundation, made sure the theatre ambience met cinema standards.

It was a small theatre to say the least, but the enthusiasm of the organisers outweighs that anomaly. Added to that, Jamaica Film Night 2 is one that could not be missed – evident by the turnout and reactions of the guests that attended – it was the last of the film nights on the festival’s calendar.

The night commenced with a Sci-Fi production titled Stone Hunters, which was finished before it actually started, leaving persons to question the film’s somewhat futuristic concept. The three-minute trailer of Girl on the Run by Pierce McLean is another one that ended too quickly for some persons’ tastes. Staged in the 1700s, the film showed a woman running for her life through a forest; it created a bit of suspense.

Paul Mullings’ They Take Us blended horror and drama, which had a strong effect as it takes viewers into a growing nightmare of a 19-year-old female whose father has left her at a rehab centre to seek work overseas.

Some of the longer films/documentaries were When a Man Lies by Letay Williams, Flight by Kia Moses and Adrian McDonald, and Dreadful Hair by Lloyd D’Aguilar. Each film was resolute, concentrating on up-to-the-minute topics such as image and relationships.

On the theme of relationships, Flight chose to highlight a hard-working father and his son, who has a dream of becoming an astronaut but is discouraged by society’s idea of a youth raised in the ghetto.

Co-director of Flight, Moses, explained, “It was important for us to tell a different story to the youth, to Jamaican men, and further for it to speak to black men. We chose to not portray the father as the villain, but instead show that Jamaica is an island of big dreamers and that there are possibilities out there.”

Sixteen short films and trailers were featured for the GATFFEST’s Jamaica-themed nights – divided into two sessions – at the end of which one production is selected for a viewer’s choice award. Director Kyle Chin copped the Viewer’s Choice Award for Mango Wars, one of the seven films shown in the earlier session (aptly called Jamaica Night 1), but Flight was the clear favourite of the audience that stayed to take in the remaining nine films, and received the award in the second session.

Director Kurt Wright’s Masterminds, a film which he says took almost three years to produce, was a close runner-up for the award with unpredictable and comedic elements, but he obviously expected Flight to take the lead. Wright said, “It’s always great when we can tell a Jamaican story, but even better when we tell a story before knowing where it’s coming from, that’s what makes it so deserving.”

The general feedback from the guests was satisfactory, but “while some movies had good moments, others needed more action”, said percussionist Bongo Herman, who never misses a chance to share his own stint in the 1970s film, Rockers.

“I remember doing so many takes for one scene because of the amount of action it involved. I know it is expensive these days to get the films out but these directors need to seek out some of the film veterans, and I guarantee they will get the sponsors instead of just focusing on the young people things,” he added.

The musician said that he intends to return to the film night next year to see if his advice has been taken into consideration.