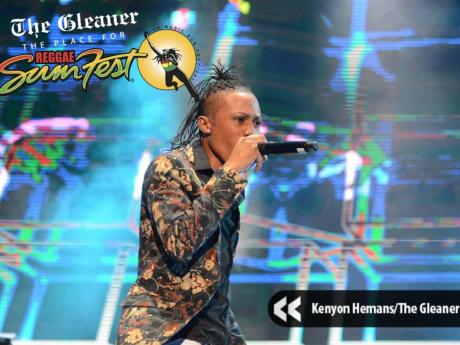 Intence takes the stage at Sumfest

Over its 27-year history, Reggae Sumfest has launched the careers of countless artistes.

Every year, up and coming talents clamour to be included in the line-up, hoping to get their shot at fame.

Last year, artistes such as Rygin King and Uptop boss, Teejay, shot to fame following their showing at the festival.

This year, artistes such as Intence, Iwaata, and Ricky Teetz are hoping to record the same success.

Iwaata who made his Sumfest debut a short while ago, recalled Rygin King's surge to the top in 2018.

#GLNRSumfest: DJ Liquid and Noah wow the crowd with their songs and covers loaded with laughter #GLNREnt pic.twitter.com/wYufZx1vzn

The entertainer told The Gleaner that with the show packing the international power it has over the years, the platform is exactly what he needs to catapult him into the spotlight.

"The reception tonight was great and mi feel overexcited by all of it. Fi have a yute like Iwaata on a show like this, me can't grateful enough because this is a big opportunity," he said.

"Mi feel great within mi self fi know say a mi first time on the Sumfest stage and weh me come out come do is a great look. A nuff artiste want dem chance yah and so me affi make use a it and me plan to," he said.

Ricky Teetz, who was making his third appearance at the show, said he always looks forward to Sumfest as it is still one of the biggest reggae/dancehall shows in the world despite many concerts rising to international levels over the years.

"It set the tone for everywhere else. We affi come here and make people know that we can perform. When people see say yuh manage yourself at Sumfest, it give your career a boost 'cause people accept yuh."