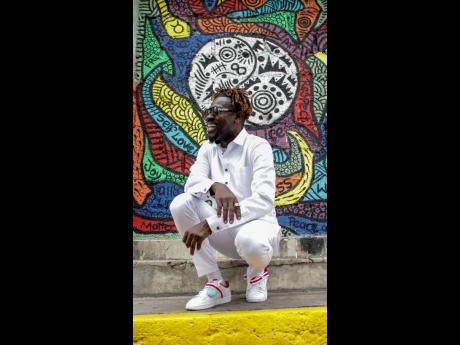 Slim Flex’s affinity for Jamaican music is just as striking as his amusing attempts at speaking Jamaican Patois. The Afrobeat act recalled entertaining his village in Ghana as a child with nothing but palm trees, makeshift instruments, and his voice.

“I love Jamaica, and I’m not saying that because I’m here now. I’ve loved Jamaica from when I was young,” he told The Gleaner. “Growing up, every Saturday morning, you would hear roots reggae or lovers’ rock on the radio, and I was so captivated by the whole Rasta lifestyle. We would get palm trees and tie them to our heads like Rastas and have our own mic and try to play like Bob Marley and the Wailers as our family surrounded us.”

His appreciation for Jamaica deepened after he learned about its cultural ties to Ghana, so it comes as no surprise that the singer laces reggae into his creations.

His current album, Gifted, features one-drop tracks like My World and Higher, and the music video for the latter is currently being edited. Shot in January on his first trip to Jamaica, the visuals were directed by Involve Media and capture grass-roots elements of the island.

“We got some really high-quality shots in places like Coronation Market, and I want to release the video before I leave Jamaica next week Saturday,” he said. “When I do my music, even though I’m African, most of the stuff I fuse in is Jamaican. I try to speak Patois even though it is not clear, but it is all for me to identify myself with the land and culture of Jamaica. I try to get myself in tune with the economic process of Jamaica in any way that I can, whether with my talent or bringing investors from Ghana here to create that bond ‘cause we need that. It’s a win-win situation.”

Flex migrated from his homeland to Canada, where he spent his early years and has been making the rounds on the international scene since 2012. Though he considers himself on the rise, Flex said he makes it his duty to help upcoming artistes like St Ann act Chuky Daan.

“I got introduced to him through management, and he sent a song that he said needed an Afrobeat chorus,” he said. “After meeting him in January and seeing him struggle to make it out there, I was inspired more than ever to give him a strength and put my edge on the song Summertime Flexx. He’s a wonderful young man and incredible artiste coming up.

“Ever since I’ve been in Jamaica, I’ve had the chance to see and work with big names, but I prefer to work with people coming up ‘cause the person with the big name doesn’t need help. Without Vybz Kartel, we would not have known of Popcaan, without Bounty Killer, we would not have known about a lot of artistes, so I believe in shedding a light on others once you break out.,” he said. He is scheduled to perform at Tommy Lee Sparta’s Stocking Up the Paper event in St Catherine tonight.

“After we leave Jamaica, we have a couple of events to do, then it’s back to the studio to record some new music. Hopefully, based on how people have been receiving me here, I will be back soon to do some more work,” he said.