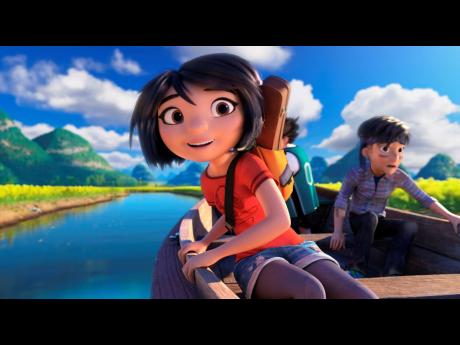 Imagine a movie about an outcast main character, typically a young child or an adolescent, who has a particular vocation that he’s especially skilled at, but may or may not be the root of his ostracism. After the main character goes to his secluded spot to contemplate his ostracism, he comes across a beast, or some magical individual, who is likely to be injured, but nevertheless displays just enough intelligence to give an indoor cat a run for its money. The main character and the creature, and possibly a motley crew of misfits, set out to protect the creature, returning it home, or integrating it into their lives, learning something about themselves before the movie’s 90-minute runtime is over.

That description fits: Pete’s Dragon, Iron Giant, How To Train Your Dragon, E.T., The Water Horse, Bumblebee and several other movies. It also fits Abominable. The main character is teenage girl, Yi, and the creature is a yeti from Mt Everest named Everest.

With all that, you might expect Abominable to be a lazy rehash of things you’ve seen before, and sometimes it is. Well, less lazy and more overtly familiar. The beauty of Abominable is how impressive it is, despite its familiarity. In fact, as someone who’s seen too many movies, it’s a wonder that I was engaged with the film throughout. You’re taken on a journey across China, as Everest and Yi escape the clutches of an evil corporation chasing after Everest.

That journey takes you to dizzying heights and swooping lows, quite literally. Abominable is expertly animated and will leave you with slight feelings of vertigo and uneasiness. It’s akin to taking a roller-coaster ride where it feels like your stomach is jumping up into your throat. It may not be an entirely original movie, but it’s the first of its kind to immerse me to this level.

Abominable sometimes dumbs things down for its audience, and it sometimes takes for granted that you’ve seen characters like this before and are capable of filling in the blanks. That said, it was a joy to watch, and I laughed out loud several times and came very close to shedding a tear, but never quite made it to that emotional level.