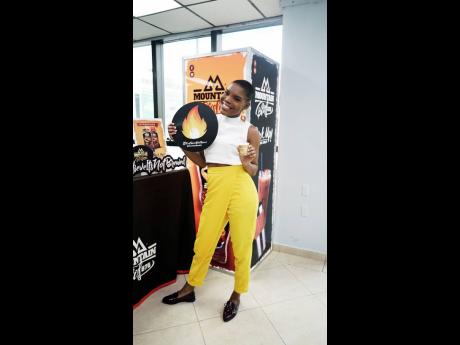 Inspired by Beyoncé’s Before I Let Go choreography challenge launched some months ago, local dancer Shamara Spencer conceptualised her own. Choreography challenges are a social media staple, and as the world continues to feel that ripple effects of the #MeToo movement, it’s really a no-brainer to combine the concepts. So to add some uplifting, happy, imagery to a media landscape filled with stories of domestic violence, child rape, murder, kidnapping, and general female degradation, Shamara (soundtracked by local singer and bassist Jamila Falak) presents the #LAAAAADYChallenge, with assurances that it is for all women, whether they are dancers or not.

“There were all these things in the media that made us seem so vulnerable. I didn’t want to put out any more darkness,” Shamara told The Sunday Gleaner. Shamara is quickly becoming a recognisable face in the local and international dance world. To her credit, she is the choreographer behind the music video for Sevana’s dancehall-fuelled track, Nobody Man. She also choreographed the music video for Shape Nice, by Vybz Kartel, Dre Skull, and Afro B.

Instead of hopping on to Queen B’s challenge, Shamara was inspired to put a Jamaican twist to it. “I was walking home, listening to Jamila’s song. So I called her and asked, why can’t I use your song? I think it’s much more powerful, and it’s Jamaican and talking about being a lady’.”

More than granting permission to use her song, Jamila joined the dance crew.

The result, produced by Xtreme Arts, is a bright video, full of smiles, legs – emanating genuine camaraderie among nearly 30 strangers. By Shamara’s description, the ladies converged on the downtown Kingston waterfront with energy akin to a sorority.

She said: “There was so much love and unity. This was a group of approximately 20 women, plus the production team. For some, it was their first time dancing, or doing choreography, or just doing anything on camera. It was so much fun.”

Fun as it was, conquering the production costs was a feat. Shamara almost gave up. Nevertheless, she took a leap, with faith, confident of the relevance of delivering her message of women’s strength, resilience, and resolve. “It was either I save and do it or ask the ladies to contribute,” she explained. Spencer noted that the purpose of the video was not to pedestal her own dance or choreography skills, but to dilute the muddy flow of miserable media on women.

“Pretty much all of them contributed because they believed in it, too,” she shared. Even her family and neighbours chipped in, donating money for the ladies’ refreshments during the shoot.

The choreography may be simple enough for some ladies to catch by watching the official video posted on the dancer’s Instagram profile (@inspire_sss), but she still intends to release a tutorial video very soon.