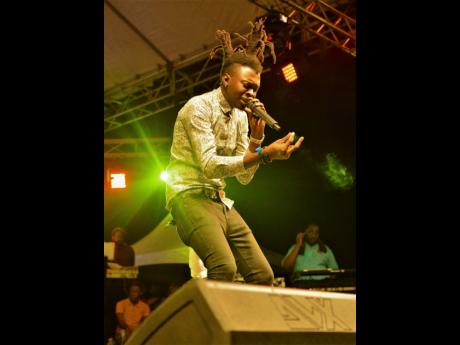 The 30th staging of the annual Ghetto Splash may be over but some of music’s up-and-coming acts are still overjoyed at being able to make an appearance. Dubbing the Ghetto Splash event as one of the best platforms for fresh acts to showcase their talent, aspiring artistes say that they want the show to go on for another 30 years.

Jahbar I, son of George Miller, drummer and band leader of the legendary Firehouse Crew, was one of the performers who made his debut on the Ghetto Splash stage. Recalling days when his father used to play on the show, the young talent said that it was a great feeling coming back to perform his own set and continue his father’s legacy. “The first Ghetto Splash weh keep, the drummer was mi father. He was a part of Firehouse crew and Patrick Roberts used to manage them, and so I know about this stage and this platform from me a likkle yute,” he said. “I am very elated. I feel like people perceived the energy looking out at them and seeing how they reacted, it was a great honour for me here. This is a special show for nuff ghetto yutes, not just the ones coming to watch the show for free but for people like me weh a rise in the industry.

“We have to give thanks every time fi Patrick Roberts and the team because anuh nuff show out deh weh a give the yutes a chance and a nuff yute out deh wid immense talent,” he continued. “On behalf of me and other yutes weh yuh give certain opportunities over the last 30 years, me wish many more years and more prosperity for the event going forward.”

Tamo J, another up-and-coming talent, described his first showing at Ghetto Splash as a special moment. He said that being included on a show of that magnitude and rubbing shoulders with some of the music’s most outstanding was a career moment he’ll never forget. “Being a part of the entire platform, especially the 30th anniversary, it meant a lot. Being backed by the legendary Ruff Kut, rehearsing with them was iconic. I know Ghetto Splash is a platform dat buss a lot of people, especially in the season of December, and to get that exposure was really good, I’m very grateful,” he said. “What bigger platform do you want as a young artiste? Not only were the big names in dancehall there but the prime minister was there, the opposition leader was there, it was huge. The show was well organised, well structured, and I want to see this show continue for a long time. We need to do all we can to make sure platforms like these remain a part of entertainment.”