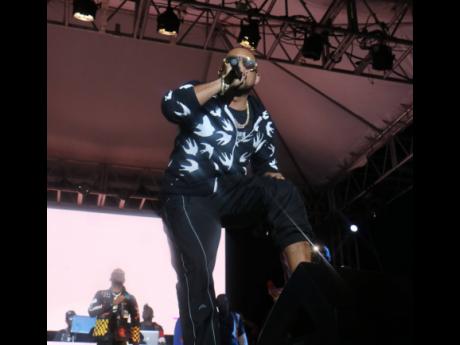 ONLINE MUSIC publication Pitchfork last week unveiled their new video series, ‘Under the Influences’, which sees artistes who are considered experts in their field analysing the music which has influenced their particular style and development. “They’ll share favourite or important moments from their genre, whether that’s analysing the intricacies of a track’s rhythm section, celebrating a bassline, or explaining lyrical decisions,” the publication explains.

First up was a very confident Sean Paul, who represented extremely well for reggae and dancehall. The platinum-selling, Grammy Award-winning artiste clearly did his homework, and can be seen with his phone in hand, fluently reading aloud his research material, but oftentimes talking straight from the heart, as he engages his viewers. “A son of reggae and a brother of hip hop,” is how he describes dancehall music, as he gets into the intricacies of the genre. “It’s very urban, very danceable. It’s the voice of generations, I would say, like reggae. A standard reggae drum beat is called a ‘one drop’. With dancehall, I would say it’s even militarised. I like to call it one genre though, reggae dancehall,” was his prelude to dissecting some of his favourite “big chunes”. Among them are Sister Nancy’s classic, Bam Bam, recorded in 1982; Ring the Alarm by Tenor Saw; No No No, Dawn Penn’s 1994 hit; Shabba Ranks and Crystal’s Twice My Age; Wayne Smith’s seminal Under Mi Sleng Teng; Buddy Bye, Johnny Osbourne; Ghetto Red Hot, Super Cat; Admiral Bailey’s Punany; Get Busy by Sean Paul, and Toast by Koffee

He reveals himself to be a big fan of the music, and one who knows the history, having had it passed down to him and then actually living some parts of it. His analysis of Bam Bam sees him paying homage to Sister Nancy’s style of toasting, the musical component, and a giving a slice of history. “At first, it’s just the horns – skap, skap – and she’s spitting on it … and she’s flowing. She’s like, ‘I’m a lady, I’m not a man’. She was actually doing a hook from Toots’ song and in that song he says, ‘I’m the man’ and she’s like, I’m a lady, I’m not a man,so I came to make my steps now to make a lady heard on a track,” was Sean Paul’s expert analysis. He continues, “So, on over 400 songs, people kinda use something from this recording, and that’s amazing,” he says.

Of Wayne Smith’s Under Mi Sleng Teng, he speaks about the Casio keyboard that was instrumental in the creation of this sound. Under his musical microscope is Johnny Osbourne’s call-and-response classic, Buddy Bye, “The drum and bass is so heavy. And then there was the call and response. Whoa/Yeah/Whoa/Yeah/Whoa/Yeah. One of the first songs I ever heard do that, and it got you to shout out and just ‘wild out’ when you went to the stage show,” he reminisced.

Sean Paul touches on the sound system culture and its origins, again showing his knowledge of the history of the music. “Back in the day in Jamaica, there was certain leading radio stations which wouldn’t play anything produced by Jamaica. So the kids used to rely on something called a sound system, which is a record player, and you hooked it up to amps and big speakers ... and that would blaze down in the middle of the street. You would go to the studio in the day and cut a song and everybody would say, you gotta cut it and put it out tonight. And it was just a big part of how these kids got heard. They called these venues dancehall, so it just became known as dancehall music,” was his quick sound system 101 class.

“Tenor Saw was just 19 years old when he started to control Jamaican music and what we started to call a dancehall music. It was a movement coming out of what reggae is; different style, definitely a more reggae-oriented music. Uniquely different,” Sean Paul notes. Of Koffee, he says, “Every few years in dancehall someone comes with a vibe, a force, just like a tone. Tenor Saw, back in 1981, he came in with a force, and so did this young girl. Big up to you, Koffee, you just won a Grammy. You’ve been a reggae and dancehall soldier, and the song is so fresh.” He commends her “mature way of writing songs” and breaks down Toast for his international viewers, giving them a slice of life in Jamaica.

When he gets around to his own Get Busy, he tells his viewers, with a laugh, “Let me get a bit narcissistic here. The first words in the song were actually the last. Jodi, who’s now my wife, said, ‘Put me and Cana name in the song’, and I was like, alright. But it was only after the song was finished and I was like, I need an intro ... . I was making names up ... Jodi and Rebecca, and people come up to me and say, ‘My name is Rebecca’. So big up to all the Rebeccas,” he shouted.