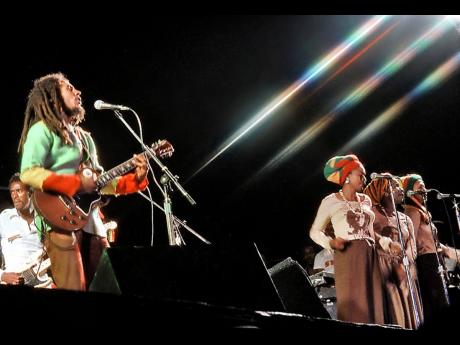 Contributed
Bob Marley and the I-Three perform at the One Love Peace Concert at the National Stadium, on April 22, 1978.

In a constantly evolving #MeToo era, the all-encompassing, potent messages of Bob Marley are given a distinctly feminist flavour in Women Rising, the second instalment of the yearlong docuseries Bob Marley– Legacy, in celebration of Bob Marley’s 75th birthday. Released on March 31, which is significant because it is “the last day of Women’s History Month”, the video, which premiered on Marley’s YouTube channel, is enshrined in female political activism and empowerment. Marley and his songs become the subtexts which champion the rights of women, even using the once considered love anthem, ‘ No Woman No Cry’, as a rallying call for feminism.

Unlike the first episode, 75 Years A Legend, where Ziggy Marley was seen doing on-camera interviews and enjoying light-hearted camaraderie with his interviewees, this time around, in this now female-dominated territory, Ziggy does cameos and it is the beautiful procession of women who speak their truth, to no one in particular, but to everyone in general. Women Rising opens with I-Threes member Judy Mowatt, known for her powerful Black Woman tribute song, stating, “I want to see women rise and I want to see women strong.”

Rohan hails Rita as the family matriarch who mothers Bob’s children by different mothers, with himself being one such beneficiary. One thing that must be mentioned quickly before it becomes submerged in the strident voices of feminine militancy is Rita’s contrasting and very girly tale of young love. Bob’s widow recounts their courtship, which began with love letters that Bob would write to her and give to his friends to deliver. “He was even sending his letters through his friends, not by himself, through his friends, to say that he liked me and wanted to come over and talk,” she recalls in a throwback audio interview. And even though Rita gave him the go-ahead, Bob would stay on the other side of the street. “He was very shy. He was a shy guy,” she says lovingly, and later adds, while the viewer is still rocking to the strains of ‘I’ll play your favourite song, darling ...’: “He had a seriousness, but it was one that you could see was reaching out for love.”

Rita also refers to herself as Bob’s guardian angel. “I was the one he would call to get women out of his dressing room. He would call my phone in my room and say come and get these people out for me. And I would do that gracefully, ‘Come on ladies, it’s bedtime’.”

But, to jump right back into the theme of Women Rising, the voice of Carolyn Cooper resounds when she says early into the well-produced, high-quality video, “I want to see women rise as equals. We need, as feminists, to just totally mash up di system.”

Cooper later adds: “One of the issues which women are now fighting for in Jamaica is the decriminalisation of the termination of pregnancy. We want more women to be able to claim reproductive rights,” is her pro-abortion rhetoric, which one can’t help but wonder just how well that would sit with the reggae icon, who is supposedly being celebrated in the video.

In a release, the film producers pay tribute to Rita, who, unlike Marcia Griffiths and Judy Mowatt, does not make a ‘live’ appearance in the film, as she is still recovering from a stroke.

“The moving and empowering short features interviews with Rita Marley, also known as Bob Marley’s wife and the matriarch of the Marley family, whose strength and character is an inspiration for people around the world. Rita was an integral part of The Wailers’ musical development, as well as a constant presence and influence in Bob Marley’s life, guardian of his legacy, and a member of the iconic reggae group I-Threes. Mrs Marley is also the founder of the Rita Marley Foundation, which works to eradicate poverty and hunger while empowering communities in Ghana and Jamaica. Her life’s work epitomises integrity and grace.”