Up to the time - Tracking Kartel’s legal troubles 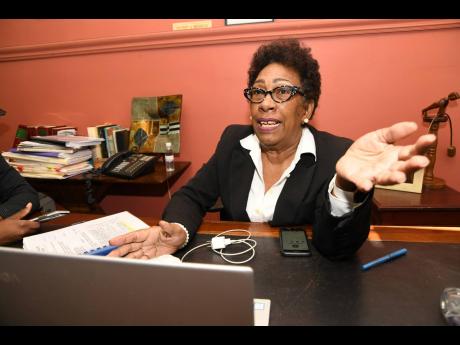 Rudolph Brown/Photographer
Valerie Neita-Robinson, QC, speaks to members of the media after listening to the Vybz Kartel appeal judgement at her office on Duke Street in Kingston last Friday, April 3.

It must have been a case of déja vu last Friday for supporters and critics of dancehall heavyweight Adidja ‘Vybz Kartel’ Palmer. It was six years ago, to the day, that he and co-accused – fellow ‘Gaza’ artiste Shawn ‘Shawn Storm’ Campbell, Kahira Jones and Andre St John – were sentenced to life in prison by since retired High Court judge Justice Lennox Campbell for the murder of Clive ‘Lizard’ Williams. It was also in April, this time on the fifth, in 2018 that their legal team filed supplementary grounds and skeleton arguments in the Court of Appeal in downtown Kingston to have the 2014 murder convictions overturned.

The Vybz Kartel trial was one of the longest criminal trials in Jamaica’s history. Prosecutors led evidence including voice notes and text messages as well as videos taken from several phones that Williams was lured to the Havendale house and beaten to death over two missing firearms.

Here is a timeline of how the trial and subsequent appeal unfolded.

September 30, 2011 – Vybz Kartel is arrested at a New Kingston hotel by members of the Flying Squad division of the Jamaica Constabulary Force and charged with possession of a small quantity of marijuana confiscated in a hotel room where he was staying during the filming of his reality dating show Teacha’s Pet. He was later charged with the murder of 27-year-old businessman Barrington ‘Bossie’ Burton. It is the same year he released the party banger Summer Time, and the TV show which involved 20 girls worldwide vying for the artiste’s affection had to come to a halt. Police charged that on Monday, July 11, 2011, Vybz Kartel along with other men conspired to murder Burton. He was murdered while standing with friends along Walkers Avenue in the Gregory Park area of Portmore. Vybz Kartel was detained for the weekend, allegedly in relation to a partially burned, decomposing body found inside his Swallowfield Avenue, Havendale, home.

October 4, 2011 – The dancehall artiste appears in the Corporate Area Resident Magistrate’s Court and is denied bail.

January 21, 2013 – Trial for murder for Barrington Burton is postponed due to lack of jurors and rescheduled for July 11.

July 24, 2013 – Vybz Kartel is found not guilty of the murder for Barrington Burton but remains in custody pending second murder case.

November 20, 2013 – Jury selection is completed. Onika Jackson, girlfriend of Williams, testifies that she received text messages from him on August 16, 2011, that he was on his way in a taxi to Kartel’s house and he feared for his life. Williams’ sister, Stephanie Breakenridge, weeps as she testifies about seeing her brother and the prosecution’s main witness in her living room on August 14, 2011 looking as if they had seen a ghost while sending text messages and talking on their cell phones. Admits under cross-examination that Lizard had been charged with firearm offences.

November 21, 2013 – Detective Constable Averell Thomas of the Major Investigation Task Force testifies that on August 22, 2011, he went to Swallowfield Avenue, Havendale, where he saw what appeared to be bloodstains on a door jamb. He swabbed the area and placed crime-scene markers around the bloodstains. The swabs were taken to the government forensic laboratory to be analysed.

Deputy Superintendent Winston Henderson says following instructions from Senior Superintendent Cornwall ‘Bigga’ Ford, the officer in charge of the Flying Squad, he assembled a team and executed warrants on three houses belonging to Kartel. During a search of a house in Norbrook, the police seized 12 passports in various names. They also went to search a house at 7 Swallowfield Avenue, Havendale, but the house was a burnt-out shell. A raid was carried out at a house in Independence City, St Catherine, but nothing was found.

November 25, 2013 – Nicola Brown Baxter, government forensic analyst, says on August 29, 2011, she went to Kartel’s Havendale house and observed several areas where fires were started, as well as ignitable equipment. She says she saw several burnt items in the house, and from her analysis, the fire was deliberately set. Cross-examined, she said no one was at the house when she went there.

April 3, 2014 – Dancehall artiste Vybz Kartel and the co-accused are sentenced to life in prison for the murder of Clive ‘Lizard’ Williams. To serve minimum of 35 years before he becomes eligible for parole.

April 5, 2018 – Legal team files supplementary grounds and skeleton arguments in the Court of Appeal in downtown Kingston to have the 2014 murder convictions overturned.

2015 – Was a quiet year for Vybz Kartel although the Viking ‘Vybz is King’ digital album was released by TJ Records and Adidjahiem Records in January.

2016 – The dancehall artiste has over 50 songs released in one year including his most internationally successful album King of the Dancehall which peaked at #2 on US Billboard Reggae Charts.

May 9, 2017 – Trial date for the appeal filed by Vybz Kartel and the three co-accused in the murder conviction is set for February 19, 2018 to be heard in the Court of Appeal. The defence was also ordered by the court to file its grounds of appeal by the end of October and the prosecution must file its case by November.

September 24, 2017 – Vybz Kartel fell ill as was said to be in hospital receiving treatment for a kidney infection.

July 2018 – The Court of Appeal ruled that the entertainer and co-convicts have the right to enter fresh evidence and agreed to take another look into the details of the trial. Arguments were also presented in the same month.

December 2, 2019 – After 16 months of waiting for a verdict, the Court of Appeal indicated the ruling would be handed down in short order. A letter to the attorneys stated that it was in the ‘advanced stage’ of preparing judgment.

April 3, 2020 – Exactly six years to the day, Vybz Kartel lost the appeal against his murder conviction. After a near two-year wait, the Court of Appeal hands down the judgment of the entertainer.