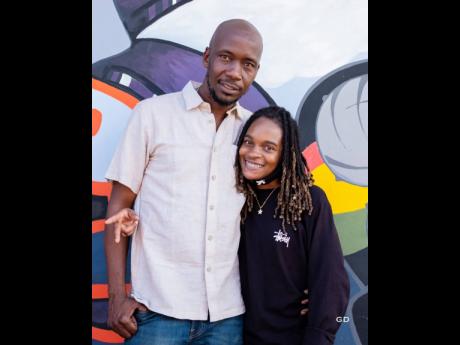 Contributed
Comar ‘Frankie Music’ Campbell, producer of Koffee’s ‘Raggamuffin’, with the artiste at his studio recently.

Although ‘ Toast’ is recognised as Koffee’s signature breakout song, the commotion-causing ‘ Raggamuffin’, which calls out gun violence and Government’s neglect of the youth, wrapped up in a must-listen, friendly, spitfire flow, is rated by some music critics as a watershed moment musically.

“What caught my attention was the fact that a 17-year-old, recording her second single, was so authentic, so real. Here was Koffee, this little teenager, deejaying in a Mumma Nancy old-days style, which was yet so fresh. She needed to be heard,” Raggamuffin producer Comar ‘Frankie Music’ Campbell reminisced.

“One of the ingredients that made Raggamuffin so good was the fact that we chose a riddim that was close to a big riddim in the ‘80s, the Real Rock. That original dancehall deejaying makes a difference,” Frankie Music shared with The Gleaner, adding softly, “A child shall lead the way.”

Frankie Music has been in the production game for a minute and it’s one he clearly knows quite well. The reggae and dancehall producer has worked with a wide range of artistes such as Sizzla, Beenie Man, Konshens, Kim Nain, Delus, RR, Raging Fyah, Duane Stephenson, Shawn Antoine, Qraig (Voicemail) and, of course, Koffee. He proudly declares that his hallmark is excellence, whatever the genre, but points out that he tries to keep his projects “as authentic as I can”.

He agrees that the Grammy Kid needs another Raggamuffin, and while he disclosed that he and Koffee have been talking, he emphasised that he has not produced any new music with her … yet. Although she was at his studio recently (on April 12), it wasn’t for a recording session; Frankie’s place was used as the venue for streaming a one-hour, Malta-sponsored acoustic set, where Koffee also interacted with fans.

“We’ve been talking and working out some things,” he stated. “Hopefully, I get chosen to work with her on another project,” was the most he would say.

But, with Koffee brewing, Frankie Music is still a busy producer. He has a five-track EP to drop in the next two weeks, he recently released Outbreak, a collab with Qraig from Voicemail, Kim Nain and Kandy Leax, and he produced a Singer J cover of a Bob Andy classic to be released soon. “And I have a lot of tracks for a lot of other persons. I have a production house and, therefore, I work with almost everybody, and I also have my set of artistes signed to my label,” he explained.

Another project which Frankie Music is intimately involved in is the VPAL Music Fest, aka ‘FrankeFest’. Today, VPAL Music, the VP Records subsidiary which allows independent artistes to access VP’s distribution channel, will, in tandem with Frankie Music, host the first VPAL Music Fest, one of the online concerts with the mission to entertain, and keep live music alive in an era of social distancing caused by the coronavirus pandemic. Frankie Music has enjoyed a fruitful association with VPal, which was also the distributor for Raggamuffin. Qraig, Kim Nain, Shawn Antoine, Leax and Javada, all artistes aligned to Frankie Music, will be the featured acts.

Frankie Music shared with The Gleaner why he got involved. “As a producer, I’m always thinking of creative ways to make Frankie Music different and have a greater impact. Owing to the seriousness of this COVID-19 pandemic, I believe people need some positive energy to help them go through this time. That’s why my team and I decided to do this. The artistes are upbeat and ready to deliver to uplift their fans and supporters,” he said.

According to the flyers, the location is @vpalmusic Instagram Live and the artistes’ IG live. Showtime is 4 p.m. in Jamaica (5 p.m. EST) and admission is free. They are reminding all supporters to BYOB (bring your own bottle.)