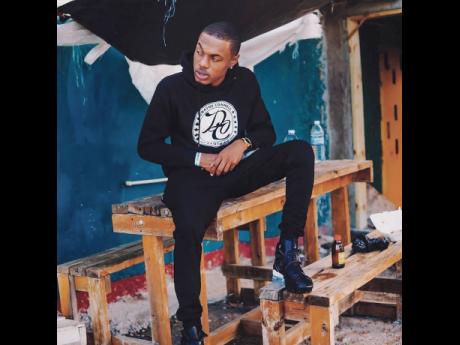 From designing party fliers to racking up an incredible music video portfolio spanning different genres in the African diaspora, 300K is in high demand. Recently featured by Billboard, the videographer has quickly cut a dash with his grandstand plans to cross over into the international market.

And he is sharp. He tells The Gleaner, “I don’t go by the title ‘videographer’ because I think of an individual involved in the live-event aspect of video production or a role within that nature. I see myself as a cinematographer and film director … I visualise a production from the script up and direct the crew and those involved.”

300K believes that when he directs a music video, it does not only illustrate the recording artistes’ lyrics, but can breathe additional life into it as well. He uses Dre Island’s We Pray as an example.

“It definitely speaks to the hard work I invest into my projects, and We Pray was the breakthrough video that allowed for more connections to be made,” 300K expressed.

Aidonia’s Krayzay, released in the same year, was another production that Clarendon-born director put together. That was three years ago, and 300K has not slowed down, having launched a professional career as a music video director in 2017.

Though in 2020 music lovers are more likely to discover the next hit, thanks to the TikTok dance trend rather than a properly constructed music video, it does not mean the latter has faded into irrelevance, he said, “I am aware of what is going on around me, but I am not necessarily faded in the field. As a creative, people pay you to think and being in this industry, there is a perception that you perform based on experience, but for me, it is all about the example I set, my personal growth. It is all about me giving a certain high-standard product at all times.”

He added, “It’s the same for short films in terms of trends; there is a linear way people do documentaries, and I don’t follow it, I like to step away from the traditional, and create my spin so that it is not something you have seen before.”

The video director is sincere about his beginning, which started with fooling around the camera settings on a smartphone. Then being influenced by an older sibling who owned a photo studio, he developed an interest in the arts, which eventually led him into the creative scene as a freelance graphic designer, primarily making fliers for events.

“I did that for about five to seven years from around 2008 to 2014, and it was enough to deal with the necessities, like sending you to school. A lot of it was self-taught through reading material and watching videos online,” 300K said. “Back then, the party scene was buzzing so it was ‘lit’ for me with more event organisers demanding artwork to promote their parties, but eventually, it was almost a case that I didn’t feel I was fulfilling my needs.”

Then, on the ground in film-making and with a name like 300K, it was a hit-or-miss start, he explained. “It could have been anything because I wasn’t necessarily creating a budget and, of course, I did not have the knowledge I have acquired (so) now instead of being low-budget DIY we are budgeting to get better results. We Pray was my first introduction to a real big-budget production.”

He currently has a crew of about six persons on his team and some of 300K’s work that shows his unique approach to production include music videos for Rapture Remix by Grammy Award-winner Koffee featuring Govana, Afro B’s Go Dance with Busy Signal, Govana’s Shallow Grung and That Mi Like Hear featuring Xtassi, Stars by Munga Honorable, Jesse Royal’s stereotype-defying reggae anthem Natty Pablo, and Kabaka Pyramid’s modern make of Michigan and Smiley’s Nice Up The Dance. He has directed two short films titled God Will Understand in 2017 and Starving Artist in 2018, and was also involved in Trinidadian soca artiste Nailah Blackman’s The Reel, a three-part introductory short-film series.

“The projects I am working on, I don’t want to disclose, but there are more short films – not music related – a feature sometime in the future. I am focused on plans ahead, especially with the increased anxiety coming off COVID-19, there were projects I was looking forward to that got cancelled,” he said. “It has also been time to remap the career I envisioned for myself. It also means revamping how we do things as a team, budgets now include the masks and sanitisers and knowing that the talents hardly wear a mask, I am mindful of the team and the number of people in a space.”