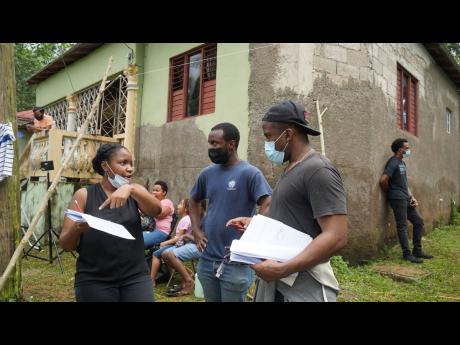 Contributed
True to her role on the set, Danielle Russell (left) directs Miguel Manning (centre), director of photography and camera operator, and Joshua Paul, assistant director, on the set of ‘Sweet Yellow Heart’. 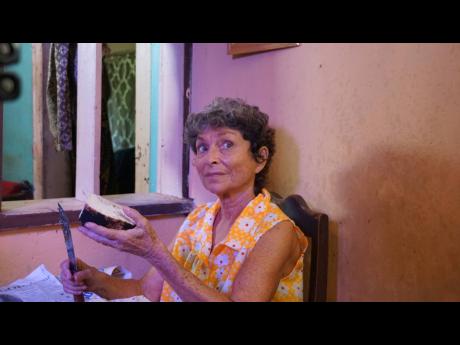 If yellow heart is synonymous with the insides of a breadfruit, then you can bet your bottom dollar that the Jamaican film Sweet Yellow Heart represents all things local and all things culture.

“Jamaicans distinguish breadfruit by their inside colour, which is yellow or white. Breadfruit with the yellow flesh is called ‘yellow heart’ and is considered the preferred breadfruit in the market because of its sweet taste. We made yellow heart the main characters’ favourite type, and from there it just flowed into becoming the name of the film,” executive producer of Sweet Yellow Heart, Alex Morrissey, told The Gleaner.

Shot in Porus, Manchester, with a life-giving breadfruit tree as a central symbol, the movie tells the story of Miss Edna, the matriarch of her family and a respected church sister who fights tooth and nail to restore her connection with her grandson, Caleb. From the storyline and characters to the locations, actors and production team, the film pays homage to the land of wood and water in an iconic manner.

“It was very important that our selection of talent and crew fit the total essence of the film and support the Jamaican film and creative industry. I was so excited to fulfil this project with ESIROM, who gave me a shot at furthering my goals through the Sama-Sama fellowship just last year,” film director Danielle Russell said.

The film was produced by the award-winning digital media agency which stands for Encouraging Social Influence; Redefining Online Marketing. Film-maker Russell also had a hand in writing the script, along with directing.

When it came to auditioning for the roles, Morrissey was blown away by the unbelievable turnout at casting calls in August of this year. “We didn’t anticipate such a huge turnout! In keeping with established COVID-19 protocols, we opted to [do] the remaining casting calls virtually, which was also a great turnout and really left us with so many options and personalities to decide on.”

The cast includes a 60-year-old Miss Edna, played by Hilary Nicholson, who is known for being a gender trainer and advocate for over 30 years, educating and empowering others to see the world through gendered lens, and to work towards “a kinder, peaceful, more caring society, which both men and women can enjoy”. The cast also included a farmer from the community where the film was shot.

Casting calls followed the approved JAMPRO and the Jamaica Film and TV Association ‘Safe Return to Set’ industry guidelines that will govern filming during and after the COVID-19 pandemic in Jamaica.

This might have been ESIROM’s first short film, but it certainly won’t be the last with a documentary in the pipeline for 2021 and a feature film for production in 2022. The company will also be stepping up to provide funding in 2021 in order to produce other short films from local writers/directors who have great stories to tell, but lack the resources, monetary or otherwise, to bring them to life.

Sweet Yellow Heart is set to be released March 2021.