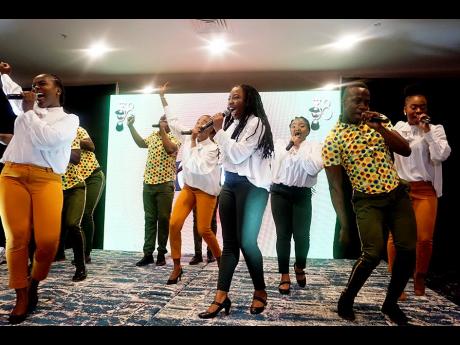 File
The ASHE Company performs at IRAWMA media launch in 2020.

In December 2019, the Ashe Company announced that come 2020, they would be looking to expand their horizons on the local film circuit with the launch of their web series, CHILL. The series was expected to start during the first quarter of 2020, but COVID-19 had other plans. With the world having been thrust into a pandemic, the series debut date was pushed back a whole year. But come March 1, CHILL will finally get under way bringing an additional piece of entertainment to people’s homes.

In an interview with The Gleaner, Integrated Marketing Lead on the series, Tristan Williams, said that despite the COVID setback, he believes that things worked out for the best as with the world having moved predominantly online, the series has the potential to reach more eyes. “One of the main reasons we had to push back the debut date was, of course, the pandemic because we wanted to weigh the market and do the release at the right time. And we believe that time is now. What the pandemic has caused is for everyone to be spending more time in their homes, on the internet, and so now is the perfect time for us to get this series out there,” he said.

“What has also happened during the pandemic is that a lot of the issues we deal with on a daily basis as human beings are more ‘in your face now’. Issues with sex and intimacy, family relationships, tumultous friendships, etc. Those are some of the things we tackle in the film because Ashe, as you know, is big on edutainment and advocacy, and so we always want to find a way to spread messages centred around those issues.” The viewing audiences should anticipate facing uncomfortable truths, especially with the HIV/AIDS epidemic as a plot device.

Conceptualised by Ashe’s executive director, Conroy Wilson, CHILL tells the story of a group of Jamaican millennials as they navigate the worlds of sex, love, and relationships. Wilson told The Gleaner back in 2019 that the characters were pulled from diverse backgrounds and that the show was set against the backdrop of a chill-spot bar and grill in an ordinary community as their centrepiece set.

Williams said the series will be aired every Monday on YouTube but says the Ashe Company sees CHILL reaching bigger platforms. “Even though YouTube is a big platform, and there are so many people we can reach in that space, our desire is to get on to every other platform we can, including television. When you get to see the episodes, you will realise that we went above and beyond in terms of production, and we really put together a high-quality series. Having pulled out all the stops to get it to look, sound, and feel a certain way, of course we want to expand beyond the singular platform,” he said.

The Ashe Company, which operates from its own production space in Half-Way Tree, St Andrew, says the latter made all the difference in putting the series together. “Normally when you hire a production house to do a film for you it, takes some time for them to understand your objective and your vision, but having an in-house team who is used to your message, your delivery, there is a purpose and a passion behind the execution that I can’t explain,” he said. “It not only helps with the entertainment factor, but it makes bringing across our messages that much easier. The series is called CHILL, but there is so much going on, you don’t want to miss it. The issues being faced by the characters in the series are things we face every day in our normal lives, and so we’re hoping that while entertaining, we can reach people. We want to connect with viewers in such a way that we encourage people to check their status, to see the importance of safe sex, etc, and just to be careful with relationships, and so on.”

In addition to the current Ashe members, CHILL will draw on the talents of past members, including Michael Sean Harris, to add to the drama and excitement.