Ce’Cile changing the narratives, one children’s book at a time 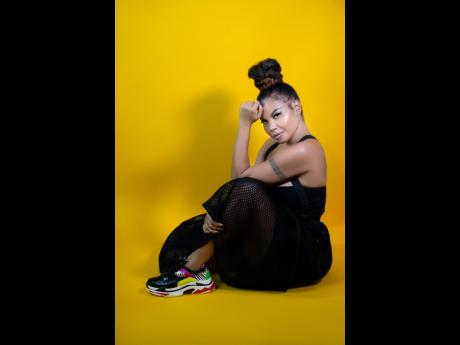 Contributed
Ce’Cile’s ‘My Hair Story’, inspired by her daughter, Christiyana Martin, is now available at Kingston Bookshop stores and online, on Amazon and Barnes and Noble.

In Ce’Cile’s at-home studio, where she usually spends most of her time, the bookshelf is running out of space. During our interview, she could be heard walking from one end of her house to the next to share the names of the books one can read if they ever stop by for a visit.

These include books related to the discipline of music from which she has made a career, from All You Need To Know About Music: Fifth Edition by Donald Passman to motivationals like How To Enjoy Your Life and Your Job by Dale Carnegie, and Lance Armstrong’s Every Second Counts, an autobiography by Sally Jenkins, and novels like Lost in Translation by Nicole Mones and even coffee-table books like David N Wong Ken’s The Runnings.

She takes a break from reading the titles, only to ask herself, “What book is this?” Then she admits, “I have horrible memory, by the way, and I haven’t been here in months since dealing with my badly-torn ankle.” The recording artiste has been taking things easy, sticking to a strict physiotherapy regiment, but has had much to commemorate this week. Her first published book, My Hair Story, was made available in the Kingston Bookshop stores on Amazon and Barnes and Noble this week. She also celebrated her birthday last Wednesday, February 24.

Ce’Cile’s venture into a new territory started last year with the announcement of her book Oceana: Adventures of a Jamaican Mermaid, but after examining the market, the recording artiste and music business executive decided to pull in the reins. “I have other plans for that book. When I looked into everything, from doing research on how to move forward, I realised I needed [a] bigger investment and better planning, especially as I wanted to tie it in with music,” she said. “I wanted my musician cohorts to create and sing kid-friendly songs to be released in collaboration with and for the book. Limited copies were printed, and I never actually sold any. I gave my close circle of friends. So, that is how My Hair Story has become my first published book.”

INSPIRED BY HER DAUGHTER

The 24-page hardcover book which is relevant to the times, is inspired by her daughter Christiyana Martin, affectionately called ‘Nana’. It aims to encourage young girls to embrace their authentic self while subconsciously speaking to mothers and fathers to be mindful of the ways they share opinions about image — hair and skin colour being a major topic.

“There are different angles to the conversation; as someone who wore false hair quite often for work, my own daughter Nana asked me if she could get a weave and that she wanted longer, softer textured hair, and it encouraged me to embrace my hair in its natural state, and then, when I would put in hair, I would try to make sure it was a replica of or close to my own. The book is a personal journey with her that imparts values of self-love,” Ce’Cile said.

The Changes singer recalls having casual discussions with friends around her daughter about hair and complexion, which again would spark an interest in image.

“My daughter enlightens me. When I was growing up, we never normally had these conversations. We never paid attention to the statements like, ‘Her skin brown an’ pretty eeh’ or ‘Her hair nice eeh’, and it’s good that our generation is [awoken], to make sure our children are poised [with an] understanding of who they are and what they represent,” she said. “However, still in society, we are dealing with children being denied entry into school because of the same things. Two of the characters in the books are her friends of mixed race and a Rastafarian girl, inspired by my friend Dale Virgo whose daughter had to face this. It is sad to see children being kicked out because of them having locs in my country, and we must make sure we are not rearing little children who are going to grow up having a prejudiced attitude.”

The recording artiste-turned-published-author says she is selling the book at a loss, as not only did she invest a lot in the creation of the book, it was very expensive to print. However, she thought it necessary as writing children’s books is a serious venture and there is not a lot of age-appropriate literature, made locally, that represent all children and topics of the times.

In her interview, she also hints that she has been working on a book that she refers to as Love Notes and Life Quotes for several years, including unused lyrics from songs, pictures, and poetry.

“I am changing the narrative first and foremost, and I have made mistakes in finding the right way to start, so I am doing research on the best way to publish it. I am happy to be where I am with this book. No one is ever too young to learn self-love and that everyone is a little different from each other — these differences being our strengths, and it teaches children in a way they can understand to be accepting of how others look, too. I used to buy books and read them to her to familiarise herself even if she could not understand. This book is for anyone with a child or knows a child that needs to learn about these simple yet very important values,” she said.