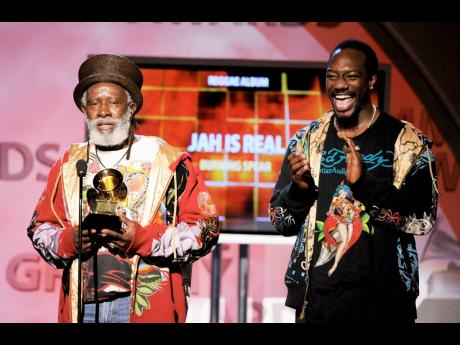 File
Burning Spear (left), and a member of the Burning Spear accept the award for best reggae album for ‘Jah is Real’ at the 51st Annual Grammy Awards on Sunday, February 8, 2009, in Los Angeles. 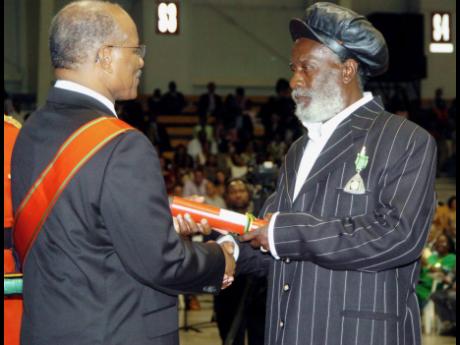 File
Winston ‘Burning Spear’ Rodney, receives his Order Of Distinction in the rank of Officer (OD) at the Ceremony of Investiture and Presentation of National Honours and awards 2007 at the National Indoor Sporting Centre on National Heroes Day Monday, October 15, 2007. 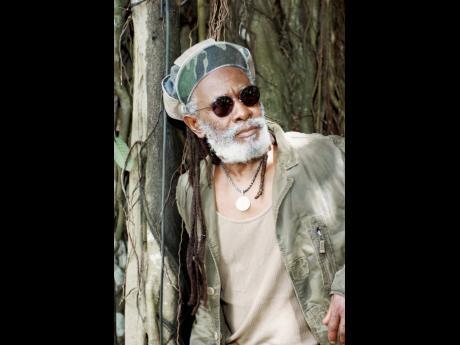 Jamaican Rastafarian roots reggae singer-songwriter, vocalist and musician Winston Rodney, known to legions of fans as the Burning Spear, a name he took from a military award given by Jomo Kenyatta, the first president of an independent Kenya, celebrates his 76th birthday today.

Burning Spear began recording in 1969 and Marcus Garvey, the repatriation of Africa, and the oppression of the black race are the subjects that he sings about. Undoubtedly, one of the most influential and long-standing roots artistes to emerge from the 1970s, the uncompromising roots singer is acknowledged as one of Jamaica’s all-time, greatest international success stories. His albums are hailed as real reggae classics and the soul rebel general in Jah’s Army has released more than twenty albums during his multi-decade career.

He won the Grammy for Best Reggae Album for his 2000 release Calling Rastafari and again in 2009 for the classic album, Jah Is Real. He has been nominated for the Grammy six times in total.

Burning Spear originally included bass singer Rupert Willington and in 1969, urged by Bob Marley, the duo auditioned for producer Coxsone Dodd, which led to the release of their debut single, Door Peep, on Dodd’s Studio One label. They were then joined by tenor Delroy Hinds. The trio recorded several more singles and two albums for Dodd, before they moved on to work with Jack Ruby in 1975.

Their first recording with Ruby, Marcus Garvey, was intended as an exclusive track for Ruby’s Ocho Rios-based Hi-Power sound system, but was released as a single, giving them an immediate hit, and was followed by Slavery Days. The group worked with Ruby on their third album, Marcus Garvey (1975), which led to a deal with Island Records. Island remixed and altered the speed of some of the tracks, much to the annoyance of fans and the group, leading Rodney to set up his own Burning Music label for future releases where he would have full control, although further releases followed on Island, including Garvey’s Ghost, a dub album, and the Man in the Hills album.

In late 1976, Rodney split from both Ruby and group members Willington and Hinds, and with a sizeable following by now in the United Kingdom, he performed in London in 1977, with members of Aswad acting as his backing band, for a sold-out show at the Rainbow Theatre. A dub version of the album, Living Dub (1979), was mixed by Sylvan Morris. His profile was raised further by an appearance in the film Rockers, performing Jah no Dead.

In June 2016, after decades of touring, he did what was his final concert in California. In an interview with scpr.org, he said, “It’s going to be my last show in California. Over the past years touring, I have been going back and forth to California and the time is right for I man to stand down from the stage. I said it makes sense to do this last show and say bye to my fans.”

Chatting with United Reggae in 2012 about his music, Burning Spear said, “You know, to be honest, when I first got involved, I could identify that I’d been called upon to do a work, but I never thought in terms of creating music for Jamaicans. My creativity was an international creativity. I know that music reaches out to all different kinds of people. Music does so many good things for so many different people all over the world.”

Spear’s wife and manager, Sonia, in a 2008 interview with lucidculture.wordpress.com, declared, “I see Spear as a messenger of the Creator, just like Marcus Garvey and Mr Malcolm X and Martin Luther King. The lyrics in Spear songs just come to him. It’s not about being a star, it’s a job that he was elected to do, this is the reason why he will never compromise.”

In 2007, the Jamaican government awarded Burning Spear the Order Of Distinction for his contribution to the music industry.