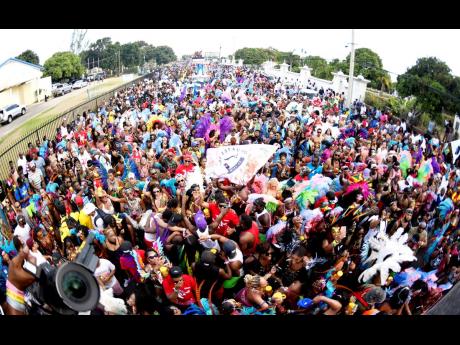 File
Bankay says carnival has an economic impact of about $4.6 billion each year. With the recent postponement, that number is now doubled.

Earlier this week, Tourism Minister Edmund Bartlett announced that for the second consecutive year, there is to be no carnival celebrations in Jamaica. The decision was made amid the spike in coronavirus cases across the island.

As of Thursday, there are 19,795 active COVID-19 cases islandwide, with Kingston and St Andrew continuing to record some of the highest numbers of new cases daily. Bartlett said that based on trends, a further postponement of Carnival was in every one's best interest.

While agreeing wholeheartedly that forgoing Carnival 2021 was the best decision for the country and its people, Kamal Bankay, chairman of the Carnival in Jamaica stakeholders committee, said that no carnival two years in a row has resulted in a significant economic loss for the country.

In a recent interview with The Gleaner, Bankay said with Jamaica having been in the advanced stages of execution for Carnival 2020 before the pandemic struck, the country would have suffered a multibillion-dollar setback from the postponement. That number, he says, has doubled this year.

"The fact of the matter is that we were in our advanced stages of execution for Carnival in 2020 when the COVID-19 virus moved from an epidemic into a pandemic. While an epidemic is a localised issue, a pandemic is global. Carnival was less than a month away when we were faced with this world issue. Costumes were made, people made deposits, venues would have been booked, artistes would have been booked, and we would have already solidified stuff with suppliers in terms of paraphernalia associated with Carnival and road march," he said.

The Carnival ecosystem, said Bankay, accounts for billions of dollars in revenue for the country annually. "It's a very simple thing. The Government studies for Carnival in Jamaica actually puts Carnival as having an economic impact of round about $4.6 billion. Multiply that by two and it's easy to see the kinds of revenue we would have generated for 2020 and 2021."

Bankay said Carnival in Jamaica "has the highest economic impact of an event in Jamaica" due to the length of the celebration and its many components. "There is no other event that has a higher economic impact than Carnival in Jamaica. That is due to the fact that it is a season of events. It's nine/ten days of activities that culminate in the grand road march," Bankay said. "And by economic impact, we are not just talking about what the persons directly associated with Carnival would have made but the indirect earnings as well. We are talking about understanding what each person that participates within Carnival spends each day, times the amount of days, times the amount of persons. Persons participating in Carnival each year are spending on a number of things from hotels to food and beverage to eyelashes, stockings, hair, make-up, transportation, clothes. There is a whole ecosystem surrounding Carnival which profits the ordinary Jamaican as well."

Still, although the economic fallout from COVID was significant, Bankay reiterated that all is not lost. He said that with Jamaica having been in the advanced stages of execution when the pandemic struck in March last year, it will be easier for Carnival organisers to pick up where they left off and pull off a fast execution whenever the live event sector gets the green light again. "Whenever we are able to do Carnival again safely, Jamaica will be able to produce a world-class event on shorter notice than anybody else because of the advanced stage that we were when we had to push pause on the execution," he said.

He notes that there was some optimism that Carnival could have been held if the island continued on its management trajectory. "When we were turning the corner late last year, and we saw the management of the pandemic by our Government with the number of hospitalisations and active cases keeping low, we were optimistic that we could keep it that way and that would allow us to stage Carnival 2021 in a safe space, especially with vaccinations and rapid testing on the cards," Bankay said.

However, with recent spikes, it would not be safe to gather at this time. "[Coming] around to this year, COVID-19 has grown into an even bigger threat than it was last year this time, and so it was just not in every one's best interest to host anything that could result in a spike in cases in any way. Gathering people for an event right now is risky. So we have to keep waiting until it's safe," he said.​