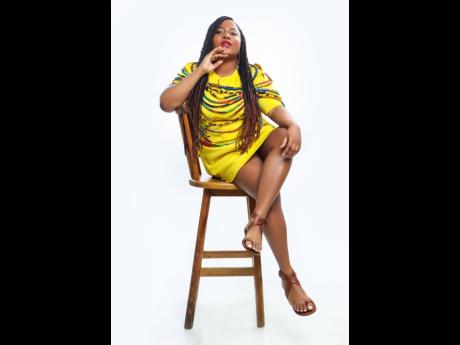 Contributed
Lady Rennae is set to use her dynamic tactics to bring innovation and charm to the afternoon airwaves.

She was guided by a beat, propelled by passion and went in search of the knowledge that would one day help her to build a brand — Lady Rennae — the voice and personality that morning radio listeners would hear. Often tasked with the tricky challenge of getting her listeners out of bed and in the right mood to tackle any challenge, as the creator and host of Wake-Up Call on IRIE FM, she would use a distinctive blend of story-telling, sympathetic listening and motivation — all scored with music to start the day.

“I was a superwoman and had magic in the morning because of what it took out of me to be coherent, to form sentences and still be engaging and entertaining at the same time,” the radio host shared.

For Lady Rennae, radio has provided the conduit for her own personal expression. As a child, before she even thought to enter into media, Lady Rennae, born Rennae Garel, was exposed to morning radio while travelling to and from school.

“The voices I heard on the radio while growing up were Dorraine Samuels, Barbara Gloudon and Antoinette Haughton,” Lady Rennae told The Sunday Gleaner.

Samuels hosted the programme Good Morning Jamaica, and later Dorraine’s Coffee Break where she welcomed listeners, like the young Garel, “with her smooth, soothing voice,” she said.

“Gloudon had her own energy and wisdom that made you feel like she was everyone’s mother or that favourite auntie and Haughton always came with the truth, rasp and wit. I celebrated them,” Lady Rennae said, not knowing that someday she would have been doing the same.

However, with her dare-to-be different personality, it was never within her to mimic the styles of the women who pioneered the space before her. A radio host for 19 years to date, Lady Rennae knew she was different from childhood. Even now, she said, as she prepares to juggle her job as the new creative director for Riddim FM and its adjoining television station, Mello TV, she recalls the situations that melded her into the woman she is today.

“I was a sociable, free spirit on and off the playing field. While skipping to my own beat as the innate leader I am, I would get called into the principal’s office, ever so often,” she said. “When the principal realised I was defending other students who would get bullied, she would let me go.”

Likewise, in her teenage years, she took bold steps. At the age of 17, she landed an internship at the Roots FM station, and since then, she said, she has never stopped moving forward, heading in the direction of success and recognition. “I was making steps from I was with Cathy Levy’s Little People and Teen Players Club; though not comfortable in large crowds, I figured out early, when the crowd moves left, I move right because it made me stand out the most.”

She had advice for future media practitioners, “To our future media personalities, make sure this is something you want to do and even if you start as an intern, set a precedence and show how you want to be treated. Also, do your homework, see who is successful in the game of media and what made them lead on the playground.”

Lady Rennae’s drive and creativity rank her high on the list of female radio personalities. Her best advice has always been to “build your brand, and people will come”.

“A lot of persons are of the impression that they have to be attached to a brand and fail to realise that the same brands come [from] a place of non-existence. I created a cartoon that became one of the most sought-after animated series and saw the tremendous traction that came from that,” she said of the breakthrough experience for a brand created by her.

The cartoon series Jamaica Mek Wi Laugh, which was aired on TVJ, was Lady Rennae’s window. She’s ready to launch another season as she transitions from morning radio with her show Real Rock from 1 p.m. to 5 p.m., every Monday to Friday. Morning radio, she said, had its restrictions, but it has been an educational round of Monopoly.

As she is set to use her dynamic tactics to bring innovation and charm to the afternoon airwaves, she said the energy she had in the morning will be amplified in the evening “because, for one, I can wake up a little later and invest more energy into the day ahead”.

“This will be a raw, most authentic version of me, but it will be a show which is for the people, by the people and about the people. I see where people are craving a medium to help them relieve the stresses of society. There is so much happening, and this will be tailored in a way that it will be informative, but we can still have fun. Creativity is the air I breathe - and all I want to see in the future of radio and television is more opportunities for local creation that’s not stifled by unnecessary restrictions,” Lady Rennae said.